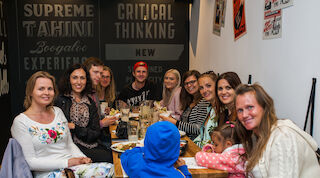 Street food chain Fafa's, which recently opened its door in Sokos Hotels Tallinn, has had its vegan menu tested by some of Estonia's best-known vegans. There's plenty to enjoy: a range of vegan pitas and salads with crispy falafel, cauliflower, hummus and delicious sauces. The cherries on top are its unbeatable sweet potato fries and house lemonade.

Fafa's is on the 1st floor of the Viru Keskus shopping centre, right next to the mad-mex Amarillo restaurant.

TRY IT FOR YOURSELF!