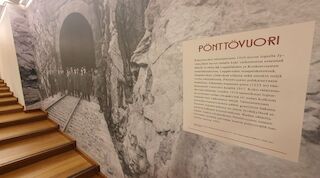 The new name of the auditorium is Pönttövuori. In the late 1910s, a railway line was cut through the mountain in question from Jyväskylä to the Savo line. 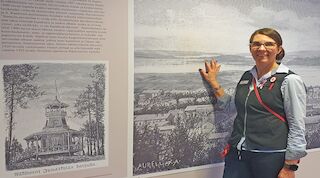 Ahonen presents the wallpaper of the former ballroom, now called Ihantola, which tells in words and pictures the history of Jyväskylä's famous Harju district (formerly Syrjänharju and Ihantolanharju). 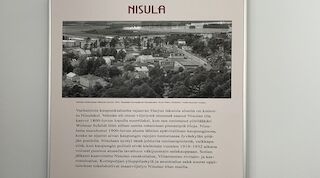 Jyväskylä was built on the lands of five large farms, one of which was the Nisila farm. It was owned by Wolmar Schildt, a local doctor and one of the most distinguished developers of the Finnish language. Schildt also made a significant contribution to the founding of the University of Jyväskylä.

"We have refurbished and modernised all our meeting rooms and renamed them with emphasis on our identity in Jyväskylä and out of respect for our colourful local history. Behind each district name is a brief story that is displayed with an old photograph on the wall of each meeting room", says Minna Ahonen, the project leader and manager of the Franseska restaurant. The restaurant serves breakfast and catering for conferences.

The best experts behind the stories and photos

The best possible experts from Jyväskylä provided valuable assistance in naming the meeting rooms, writing the stories and choosing the photographs. Their historical knowledge of the distinctive features and individual character of the districts has been written on the wall of each meeting room based on information from Erkki Fredrikson, former curator and amanuensis of the Museum of Central Finland. Fredrikson is a non-fiction writer and expert in the history of the area. Jussi Jäppinen, who has written a doctoral thesis on the development of the Jyväskylä cityscape, assisted as an expert in photographic history. Jäppinen is a graphic designer and photographer who has published dozens of photographic and other works. Some of the pictures were taken by him, whereas others were obtained from the archives of the Museum of Central Finland.

"I have learned an extraordinary amount from these gentlemen about my own hometown. It's really great that they wanted to participate in this fascinating project, which we started off by asking our own staff for ideas about the district names that best suit us", Ahonen says.

Älylä: an idea comes to life

The existing names in the conference rooms lacked a unifying theme, and the idea of changing them came about after one meeting room was refurbished into a creative space that fuelled innovation and ideas. It was named Älylä, after one of the few residential areas in the city that has preserved its original architectural appearance. It is located next to Seminaarinmäki in Jyväskylä. A century ago, plots of land in the area were only available for seminary lecturers to acquire, so the townspeople began calling the area Älylä, meaning a place with plenty of intelligence. As so often happens, the nickname has lived on.

"The names of Jyväskylä's traditional neighbourhoods date back to the 1500s and tell a huge amount about the history of our town. For example, our ballroom was renamed Ihantola. The district was named after Ihanti Jyväsjoki, who was the earliest known tax-paying resident of the region."