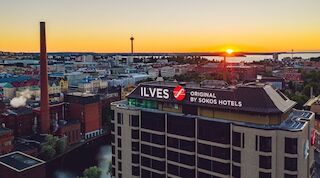 Hotel Ilves' attractions include completely renovated facilities, views from the rooms and an even wider range of restaurants. 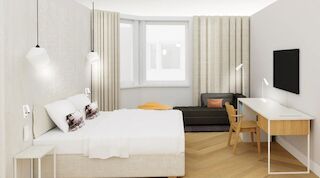 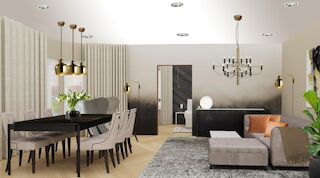 Hotel Ilves originally became a part of the national landscape on the shores of Tammerkoski in 1986. When it was opened, it was Finland's tallest hotel, and it rapidly became one of the most popular hotels in the country. Finns and international guests alike enjoyed their time at Ilves, and the hotel's restaurants became the legendary centre for Tampere's evening and night life.

Now, the Ilves renovation project is finished. The hotel rooms have now been renovated with new surface materials, bathroom surfaces and furnishing, windows and balcony doors, and heating and cooling systems. The water and sewer systems have also been renovated. Additionally, the electrical systems, lighting, and automation have been modernised.

Similarly, the restaurants, Ballroom, and the hotel's top-floor Maisema cabinet have all been renovated. One of the eye-catching changes is the new rooftop terrace, built on the roof deck above the Amarillo restaurant and Ukko Nooa pub. The terrace has both interior and exterior access.

Ilves' new hotel manager Marco Sylvelin started at his new post at the start of the year. Sylvelin has extensive experience with management tasks in the hotel business, having previously worked with Rantasipi Aulanko and Eden Nokia.

– The hotel's renovations have been conducted with respect for the past. For example, the patterned brass pillars in front of the lobby elevators had been covered up over the years, but now they have regained their original splendour. The lobby's brass ceiling has also been renovated and modernised. And finally, the pride of Ilves, the gorgeous Ballroom has been restored to its original size, says hotel manager Sylvelin.

The central location, diverse conference rooms, top-floor Maisema cabinet with its sauna and splendid views, all make Ilves a lasting favourite for guests coming from near and far.