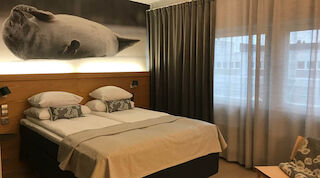 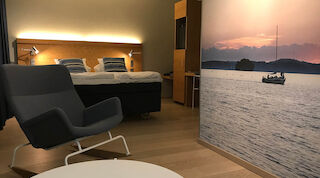 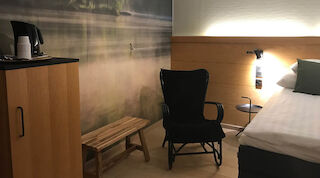 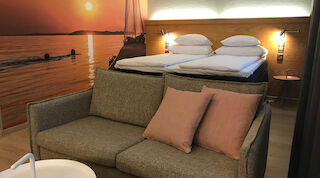 This autumn, we have been working hard on our Superior rooms at the Original Sokos Hotel Lappee: In total, eight rooms have been renewed and given a new Saimaa theme. The idea to use the Saimaa area as the theme felt natural to us, as our city is located on the shores of the beautiful Lake Saimaa and it is close to our heart. Our foreign guests marvel at the peace in the Saimaa area, its lushness or its snow and ice, as well as its natural beauty and pure nature. To a Finn, a lake view is the landscape of their soul.
The themes we implemented were The Old Channel, Sunset, Moonlight, Sailing, Log Floating, Seal Cub in Snow, Jetty and Cabin. Most products used for the rooms are Finnish, as Finnishness is an integral part of Original Hotels. All rooms feature a themed photo wallpaper that covers an entire wall. The photographs used for the photo wallpapers of the Old Channel and Moonlight rooms, for example, were taken by Tuulia, who works in our reception. The photo of the jetty was taken by a local master photographer Mikko Nikkinen (Storymaker). The Sunset photograph depicts the Lappeenranta harbour and the Log Floating photo was captured from an old Finnish film named Tukkijoella tapahtuu (1949). The Seal Cub in Snow room's photo is a beautiful shot of a ringed seal cub resting on a frozen lake in the spring, taken by Juha ‘Seal' Taskinen. This is a very special room to us: starting from 2020, we will work together with the WWF to help protect the ringed seal population of Lake Saimaa.
With the chosen interior design, we have attempted to create peace and harmony for our customers. As the evening grows darker and the winter colder, it is wonderful to wrap up in a woollen Ivalo blanket and enjoy a hot beverage while soaking up the room's calming atmosphere. Below, you can read more about some of the brands we have used in the interior design.
And the bed – that is the most important part of a hotel room. We will offer you a wonderful night's sleep in Familon's hefty Superior bed. All the renovated rooms now have a double bed that guarantees a good night's sleep – or, at least, it will not come down to the bed!
These rooms have been renewed with love and care – just for You! We hope that you will enjoy your stay and feel the happiness that we felt when these rooms were designed and implemented.

If you would like to know more about the products used:
Nikari / December chairs and Arte Biennale stool (Seal Cub in Snow and Log Floating)
"Nikari is a design studio and furniture manufacturer established in 1967. During its first years, the company worked closely together with some masters of Finnish design and architecture, such as Alvar Aalto and Kaj Franck. We want to transfer the understanding of traditional carpenter skills to the next generations so that wood could be used in the best possible way in Nordic design in the future."
Lepo Product/ Moderno chairs, designer Yrjö Kukkapuro (in most of the rooms)
"The Lahti-based Lepo Product Oy furnishes public premises with 60 years of experience, with high quality and flexibility. Lepo was established after the war to meet the home furnishing demands of reconstruction and the wealthier era. It was founded in 1953."
Pentik / Bruno bench and stool (Jetty and Cabin)
"When others moved out of Posio, we moved in. The company was founded in 1971 – by accident, as proper companies usually are: Anu Pentik's ceramics and leathercraft hobbies, her way of life, began to gradually make money. Pentik's dishes became known for their roundness and their sense of craftmanship."
Hakola / Hakola Round tables (Sailing)
The Round table was designed by Ines Wartiainen and Fanni Suvila and it was manufactured in Hakola furniture factory in Jurva, Southern Ostrobothnia.
Vallila / curtains (all rooms)
Vallila's history reaches back more than 80 years: in 1935, Otto Berner from Switzerland established a company called Suomen Silkkituote Oy. Otto Berner had learned to weave in his home country and noticed that there was a demand for lining and undergarment fabrics in Finland. In 2008, the company's manager at the time, Anne Berner, was in charge of the interior fittings of three Sokos Hotels opened in St. Petersburg.
The rooms were designed by Architect Agency Ovaskainen / Kaisa-Mari Mustonen.
We have also included some Scandinavian design, such as Hay's (Denmark) fun and handy Don't Leave Me nightstands and Hay Dots decorative tabs.