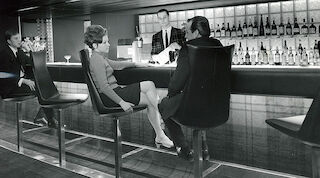 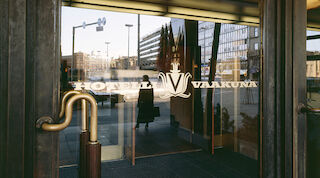 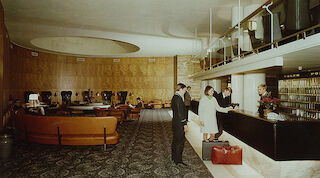 Stories over the years from Vaakuna Helsinki

Stories over the years

Interest in Finland brought about by the Olympic Games attracted tourists to the country on a scale never seen before. The menus included French delicacies of many kinds, and foreign star performers were invited to entertain the guests. After the war years, the programmes of the restaurants included performances by famous jazz musicians, fashion shows, revues and magic tricks. The use of bar stools in front of the selling counters was forbidden until the 1950s. After the decree was abolished, restaurants immediately renewed their interior design.

International delicacies and seasonal products were introduced to the menus. In the 1950s, vegetarian dishes created with health in mind were a novelty.

The impact of the Olympic year 1952 was visible in the old menus. In the 1950s, menus printed in four languages and containing international delicacies were in use at the Vaakuna Restaurant. The menus included familiar choices for foreign customers. Among Finns, the dishes were considered specialities for the upper classes, as Vaakuna was one of the finest restaurants in Helsinki. At Vaakuna, international food was cooked using Finnish ingredients in a creative manner, producing fusion cuisine in the 50s fashion. The dishes on the menu were quite heavy, with lots of cream and butter used in the cooking.

The rooms of the Vaakuna Hotel, opened in 1952, were considered modernistic at the time. American tourists, for instance, fell in love with the furniture and would have bought it if they could. The Americans called the Vaakuna Hotel "the pearl of Europe".

A delegation of about twenty people from the Christian Dior fashion house stayed at the Vaakuna in 1953.

The Vaakuna's interior design is in part protected by Finland's National Board of Antiquities.

Original Sokos Hotel Vaakuna was designed by architect Erkki Huttunen, who had seen the double door construction during his trip to America. Huttunen later implemented them in the Vaakuna. The doors worked so that the customer would leave their clothes for washing in the door closet, and the hotel service picked them up by opening the closet from the corridor side. This meant that the customer was not disturbed.

Erkki Huttunen designed the decor of the lobby with the fireplace and the rocking armchairs. The model of the chairs has remained the same through all these years. The chairs have been renewed in the meantime, though.

The sculpture made of red granite in the centre of the lobby was created by sculptor Gunnar Finne and is a protected item. The hotel was completed during a time of depression when the acquisition of raw materials and goods was difficult. That is why artist Paavo Tynell designed the lighting fixtures of the Vaakuna out of brass. The lamps on the wall of the reception are originals designed by Tynell.

In 1972, the world's first balcony skiing event was organised on the roof terrace of the Vaakuna. The track was 27 metres long. The intention in the skiing competition was to speed up for 10 metres and then slide for the remaining 17 metres. However, the weather conditions were so unfavourable that the competitors had to ski the whole distance. American newsmen were present at the scene and sent a newsflash of the event to the U.S.A., where the news of the overseas wonder spread across the continent.

The Vaakuna was the first hotel in Finland to offer its customers film screenings in the private Bio room. The room could accommodate 80–100 people, and a projectionist was always available courtesy of the hotel. A special feature of the film room were its sliding doors, which together with two-sided curtains allowed the room to be divided in two.

The Vaakuna building's style represents pure functionalist architecture. After the wars in particular, the style was used to build up the identity of the young nation-state. The distinctive style and original functional spirit of the building have survived well through the years.

Over the decades, numerous celebrities of their time have stayed at Original Sokos Hotel Vaakuna. Film stars of the 1950s often left their signed picture in the guest book. The hotel's star guests have included Gregory Peck, Paul Anka, Armi Kuusela and Yuri Gagarin.

In the early days of the Vaakuna, butlers managed the restaurant hall. The customers ordered the food in advance, and two butlers took the orders. Customers were expected to dress very well, as the place was the finest restaurant in the city. Wearing trousers and a jacket of different colours prevented entry to the Vaakuna. In summertime, braces were not to be visible.