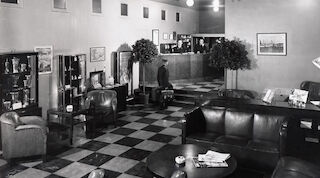 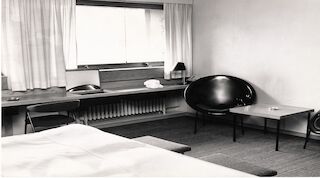 This year we are celebrating our hotel's 90-year history!

In the 1800s, the land upon which the hotel is located lay beneath  the cloudy waters of Kluuvinlahti bay. According to an unconfirmed story, there was a pier where alcohol was served on the current the location of Hotel Helsinki. The City of Helsinki donated the plot of land for public use, but leased the corner plot at the intersection of Hallituskatu and Kluuvikatu for 4 pennies per square metre.

In 1930, the new premises of the bank, Helsingin Suomalaisen Säästöpankki, were built on this plot of land. In addition to banking, from August 1930 the premises was home to a hotel and restaurant operations. The building itself as well as the hotel decor and furniture were the work of the architect P.E. Blomstedt. On opening its doors to the public, the hotel received extensive attention in the press. With its halls, extensive restaurant facilities and guest rooms, the hotel was an eight-storey facility, making it the first of its kind in the country. A large Finnish hotel in Helsinki was now a reality. Despite the difficult economic situation and during the years of prohibition, the hotel quickly gained a strong foothold, especially amongst businesspeople, artists and sportspeople. From the 1930s, prestigious meetings were held on the ballroom floor and a variety of festive occasions were celebrated with excellent food.

The sportsmen Paavo Nurmi and Gunnar Bärlund were valued guests at the hotel, where the returnees from the 1932 olympics in Los Angeles were celebrated with music and cheers. The autographs of Urho Kekkonen and Benito Mussolini are also recorded in the hotel guestbook.

The 1940s brought years of food rationing, in spite of which the hotel managed to continue its restaurant activities insofar as possible. The menus in the restaurant were priced according to the ration cards, and even sweet delicacies were on offer with a bit of luck.

The 1970s saw the opening of the legendary Helsinki Club, one of the city's most popular discos and places to be seen since its opening. Traditional beauty events were celebrated at the club, with the new Miss Finland and Miss Scandinavia and their successors. On many occasions, the hotel manager had the honour of the first waltz with the newly-crowned beauty queen. In 1971, Hotelli Helsinki moved towards the new era by becoming part of S Group.

After half a century in operation, Hotelli Helsinki was in need of a change. The hotel was completely refurbished in 1983 over an 11-month period. The interior design team of Esa Vapaavuori and architect Kaj Johansson refurbished the hotel rooms in wood, following the functionalist style of the 1930s.

In the mid-1990s, the hotel gained considerably more space when Suomalainen Säästöpankki ceased operations in the midst of the country's banking crisis. The number of rooms in the hotel increased to the current two hundred or so. The reception of the hotel moved from Hallituskatu to the Kluuvikatu side, restaurant Fransmanni was built in the former banking hall, and the Amarillo restaurant was opened on the corner of the building. It was transformed into the Memphis restaurant in 2000.

The most recent room renovations were carried out in 2006 and 2007, under the guidance of interior designer Maarit Gummerus. The Fransmanni restaurant was given a new lease of life in 2011 by interior designer Jutta Johansson. Fransmanni was renewed again in March 2016, with the concept being changed to the current Frans & Amélie, part of the Frans & Les Femmes bistro chain. Helsinki Club flourished until well into the 2000s, and opened its doors to revellers for the last time in December 2012. The EasyFit Helsinki Club fitness centre now operates on the same premises.

The major selling points of the hotel have always been its ideal location in the centre of the city, quiet rooms and friendly service. Today, Original Sokos Hotel Helsinki is an integral part of the vibrance of the city. We know our city inside out. Our relaxed and friendly staff guide our customers to Helsinki's sights, experiences and hidden gems.