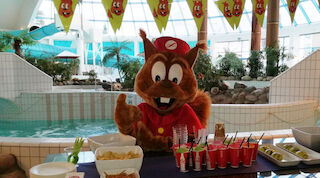 Jouni from the pool area noticed that Onni's name day was on 28 February. Jouni and the other pool area employees quickly organised a name day celebration for Onni. The feast included juice and cookies. Onni came to visit a couple times each hour and brought smiles to the faces of children and more mature swimmers alike!
Jouni, Break Sokos Hotel Eden, Oulu

Souvenirs for a porridge lover

At breakfast, a customer told our staff that their significant other, who had not joined the gentleman on his trip this time, had been pining after our barley porridge. Our Aleksi packed some of said porridge for the gentleman to take home. We soon received feedback from the lady, who told us how happy she had been when her husband surprised her with the barley porridge. She promised that next time she would be enjoying the porridge in person.
Aleksi, Break Sokos Hotel Bomba, Nurmes

A family that had stayed with us left in such a hurry that they dropped all their luggage in the middle of our parking area and did not notice! Jonna from our reception did notice however, and the first thing she did was to run outside and haul the luggage in as it was snowing. By then the family had noticed what had happened as well, and they were already on their way back. Thanks to Jonna's quick actions, the reception staff was soon enjoying a tablet of "Thank You" chocolate.
Jonna, Break Sokos Hotel Vuokatti

The most important bunny

A child forgot their bunny plush toy at our hotel. Laura from our reception mailed the bunny to our small customer and added an Onni the Squirrel toy in the parcel as well. Soon we got email from the child's mother, who thanked us and told us that the owner of the bunny and Onni was as happy as can be.
Laura, Break Sokos Hotel Flamingo, Vantaa

A slightly tired-looking couple arrived at Amarillo. I asked them how they were doing, and the husband sighed and asked if he'd really need to tell everyone that their tyre burst, and they had to leave their car on the side of the road. I sat them down and told them to relax, enjoy each other's company and forget about everything else.
I poured a cranberry long drink for the husband, as he said he really needed one, and a soda for the wife, since she was still going to have to drive their rental car. I asked their waiter to pay them extra special attention, since they had had a rough one.
Then I went back to my duties as a doorman. When the couple was about to leave, the husband surprised me with a big hug. He said that my small gesture really made a difference in their day and that I deserved a big thank you. A good deed each day keeps the doctor away!
Miicu, Break Sokos Hotel Flamingo, Vantaa

After our candle-lit Halloween swim event, a young nervous-looking man was standing near our reception. I asked if I could help him somehow. He told me that he would need to catch the last bus of the night that left in a couple minutes, but he was still waiting for his girlfriend. The clock was ticking and eventually he missed the bus. When the girlfriend finally arrived from the dressing room, they had a "personal development review" and started figuring out what to do since it was raining and everything.
After I listening to them for a while, I asked what direction they were headed in. They said they were going to the city centre. I told them that I was just finishing my shift and offered to drive them, even though it was a slight detour for me. They accepted and off we went. They we more than surprised and more than happy with the conclusion.
Suvi, Break Sokos Hotel Eden, Oulu

About to pop the question

A customer called to reserve a room. It turned out that he was about to arrange a surprise proposal for his girlfriend. Inspired by this information, the reception staff decorated the room with a bouquet of roses, sparkling wine, chocolates and a fruit basket. It was on point!
Jonna & Heidi, Break Sokos Hotel Vuokatti

Conference guests were returning from their lunch, and a couple of ladies assumed genuine Break –positions. They relaxed on the lobby bar couches from where they, most likely jokingly, asked for a blanket. Well, I took them seriously and took them a blanket. I can assure you they were positively surprised. Something quite small, but surprising.

A hiking tour which ended at a hotel

A mother and her young son had left to go hiking. Their purpose was to overnight in a tent. That night, however, we had considerable rainfall, and the tent of inexperienced hikers had become wet. Apparently also their equipment to light a fire had been soaked, because the mother called the hotel sounding miserable, as they didn't even get a fire going.

Sanna, who works at our restaurant, took the call. The mother was worried her son would not be able to walk all the way to the shelter, and asked if they could stay at the hotel. Our hotel was full, but Sanna came up with a solution. She was able to place them on the map, told them the phone number for the local taxi, and advised them of the nearest road to where the taxi could be ordered. After this, Sanna started preparing our sauna cabinet with extra beds.

After some time, mother and son arrived at the hotel, and were very pleased with their rest between dry sheets. The tent was placed in the sauna to dry, and they were able to continue their trip on the following day.

Sausages on the menu

Päivi was adding some logs onto the fire in the fireplace when a couple walked by. They remained to admire the crackling fire. Then the man noted that he wished they had sausages, as they were a little hungry, and all the restaurants had already closed. I got an idea and asked them to wait. I quickly popped in to our shop, grabbed a pack of sausages and arranged a campfire. The customers were really happy and could go to sleep feeling satisfied.