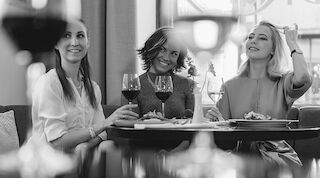 A group of Swedish ladies were staying at Torni in the middle of the Finnish winter. Due to a blizzard and some mobility issues, the ladies missed their ferry back to Sweden and had to stay one more night at Torni. The lively bunch passed the extra night by sitting at our American Bar talking to our bartender Mikko. The ladies were wondering why they were not able to arrange a taxi to pick them up the next day so they could catch the next ferry. Ville told them it was because the taxi drivers were going on strike the next day. To prepare for the strike himself, Ville had asked his significant other to bring him to work the next day. After a couple of phone calls, everything was set. Ville's significant other first brought Ville to work and then took the ladies to the ferry's terminal – in two trips!
Ville, Solo Sokos Hotel Torni, Helsinki

Our reception was very busy on one Saturday afternoon, when our head chef happened to walk by. Soon she returned with some reindeer pastries and tartalettes that were left over from brunch. The people queueing at the reception got a surprise and our restaurant got some very efficient marketing. That night a group dining at our restaurant was sent some reindeer pastries as a hello from the kitchen. One lady from the group told her husband: "Now you get to taste how good these are too!"
The head chef, Solo Sokos Hotel Torni, Helsinki

Eetu, our wonderful trainee at the reception! A guest was about to be late from an important dinner at the Lahti city centre. The guest was very nervous and told us that they would not have time look for a parking space. Eetu offered to find our guest's car a heated parking spot. He drove the guest's car to the Toriparkki parking area and took the keys straight to the restaurant the guest was dining at.
Eetu, Solo Sokos Hotel Lahden Seurahuone, Lahti

A guest from Germany, who had stayed with us earlier in the week, sent us a message saying that he had seen the most perfect pair of Adidas sweatpants in Intersport, but after thinking about it for a long time decided not to buy them. When the guest got home, he started to regret that decision, and decided he wanted the unique pants after all.
Cridu took control of the situation and performed a genuine Solo act. At the guest's request, Cridu went to the store, took a picture of the pants and checked they had the guest's size available. The guest promised to disclose his credit card details, so Cridu could go and buy the pants and then mail them to Germany.
"At first I say again a BIG, BIG KIITOS."
Christina, Solo Sokos Hotel Torni, Helsinki

An older Finnish lady stayed with us for four nights. On the second day she remembered that ticket sales for a classical concert was due to start on that day in Jyväskylä. The lady told us that the concert is always very popular and that the tickets were always sold out in one day. As a music enthusiast, she absolutely wanted a ticket for herself.
Together with Karolin from the reception we tried to come up with a way to get a ticket. Unfortunately, the tickets were not available via Estonia's Piletilevi service, so the best way to get the ticket was to buy it online. We first tried to pay for the ticket with the lady's credit card, but unfortunately, she had forgotten some of the necessary information. Our lovely Karolin then used her personal credit card to buy the ticket. At the last moment she was able to reserve the best seat in the house for the lady, and the lady was very pleased and happy for Karolin's friendly and warm help.
Karolin, Solo Sokos Hotel Estoria, Tallinn

Smoothie as you wish

A family from Helsinki, consisting of a mother, a father and a 10-year-old girl, came to stay with us. The parents ordered themselves drinks and went to sit down. At this point, we offered the child some cookies. After a while the girl came back to order herself a smoothie. I asked her if she had ever made one herself. The girl shook her head and I asked her if she wanted to. She was allowed to create and decorate exactly the kind of drink she wanted. The smile on this little girl's face said more than a hundred words! Before departing, she came over to give a hug.
Heidi, Solo Sokos Hotel Torni Tampere

A customer appeared very nervous when checking in. My colleague Ann asked if we could be of assistance. The customer appreciated our asking and told us his suitcase had gone missing at the airport and he was very disappointed. In addition, he had received poor service, as no one had seemed to take any interest in his missing luggage.
Ann took charge. She asked for the customer's contact information, calmed him and invited him to relax at our Wellness Club.
Ann contacted the airport's customer service to find out what the status of the lost bag was. She wrote a claim, based on the information provided by the client, in order to avoid similar unprofessional situations where an English-speaking client was not properly informed about missing luggage procedure.
The customer's luggage was delivered to the hotel during the same day, and the customer was very grateful for personalized service and care.
Ann, Solo Sokos Hotel Palace Bridge, St. Petersburg

A couple in the Grill It! restaurant were having dinner and celebrating their 40th wedding anniversary. The assistant Henna from the dining room and Tatiana from the kitchen created a wonderful dessert dish for the, with a greeting. They were told this made it their best wedding anniversary ever. The comment of the assistant coach was: "I don't know which one of us enjoyed it more, our customers or ourselves!"
Henna ja Tatiana, Solo Sokos Hotel Torni Tampere

A couple wished for the quietest possible room, where the noise from the renovation of the Yrjönkatu bath would not be heard. I decided to surprise them with a room upgrade, and chose them a room on the 11th floor. The room had a seaview, and was on the opposite side of the renovation area. The customers were delighted and quite satisfied with their room.
Jenni, Solo Sokos Hotel Torni, Helsinki