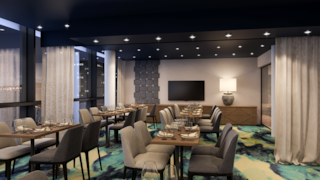 Kupittaa, known in Swedish as Kuppis, is a rapidly developing district in the eastern city centre of Turku with a wealth of modern office facilities, hospital buildings and residential buildings currently being planned and under construction. The Kupittaa area has developed around the oldest and largest urban park in Finland, Kupittaanpuisto park, which has served as a venue for entertainment events and even tournaments since as early as the 16th century. Today, the park is still the heart of Kupittaa: the area houses the popular children's Adventure Park, the Kupittaa outdoor swimming pool, a pavilion restaurant and numerous sports halls, outdoor sports fields and a football stadium, among others.

The Kupittaa area is being determinedly developed as a centre of sports, with the Kupittaa Ball Game Hall, completed in 2017, being the most recent development. The start of July will see the opening of the long-awaited new Original Sokos Hotel Kupittaa located next to Kupittaa station, which will serve the many business travellers visiting the area in the winter season and those attending the sports events held in the outdoor sports fields in the summer season as well.

In Turku, hotels have traditionally been located near the Market Square and on the western shore of the Aura River, so there has been a clear demand for high-quality accommodation at the heart of the expanding university and hospital campus. The Kupittaa hotel features 196 inspiring and modern rooms, of which 10 were built to be particularly spacious in response to the needs of the physically impaired. All of the rooms feature clever and easy-to-deploy extra bed solutions, providing convenient accommodation for families and teams as well. Sports team managers are also sure to be excited about the possibility of ordering snacks from Prisma directly to the hotel's refrigerated pick-up spot! And those arriving in Turku by train are sure to appreciate the fact that they can reach the hotel via an indoor route, sheltered from the rain.

Original Sokos Hotel Kupittaa's restaurant concept and spicy, colourful interior decoration have been thoroughly thought out to serve local customers during lunch and after work as well. The restaurant and lounge facilities located on the hotel's entrance floor serve breakfast prepared in a modern open kitchen and provide seating to approximately 300 guests on two floors. Guests are served by Bistro Elli, the name of which was inspired by Elli & Gunnar, a former dance restaurant beloved by the residents of Turku. Restaurant Gunnar was already opened in Solo Sokos Hotel Seurahuone, so the ‘dance partner' hasn't been forgotten about either. The hotel's observation deck on the top, ninth floor will also include something that is sure to be a hit, namely rooftop terrace and bar Kauppis, which is connected to a spectacular sauna section and gym.

The Kupittaa hotel features pleasant meeting rooms for small gatherings, while larger conference facilities are available via the area's cooperation network. The block next to the hotel houses the recently completed Visitor and Innovation Centre Joki, the numerous meeting facilities and stylish auditoriums with cutting-edge technology of which are ideal for meetings of up to 200–250 people. Located close by is also the popular auditorium of Medisiina D, a new building dedicated to teaching and research in the field of medicine in Turku.

Another novel and topical aspect of the Kupittaa hotel are the sustainable choices made in its construction and materials. The hotel rooms include tablets for guests to use instead of hotel binders, and the maps of Turku on the walls feature QR codes that provide information on the city's sights. In addition to this, the hotel lobby features large displays providing information on train and bus schedules similar to those found at airports, the rooms' laundry bags are made of paper and the basins in the public facilities are also made of recycled material. Convenient and innovative!

Congress City Turku would like to wish good luck and success for the opening of the new hotel to the entire staff's Kupittaa United team!