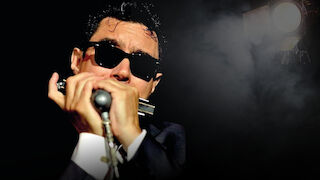 20.45 Dave Forestfield Band
Dave Forestfield is an award winning artist both in Finland and in USA. He has launched 9 solo albums and his music is based on relaxed sounds of the piano and guitar which have influences from soul, blues and rock'n'roll.
21.45 "Etta James Tribute" Mirkka Paajanen & Peela orchestra
Etta James -tribute concert with singer-songwriter Mirkka Paajanen takes you on a time travel from 1955 all the way back to the 2000s. The concert displays the sounds of the Grammy award winner Etta James with the most recognised songs and recordings. Mirkka Paajanen is known as a singer as well as a songwriter in Finland. Mirkka is described as a soulful singer and a charismatic performer on the Finnish media such as Helsingin Sanomat as well as in Me Naiset newspaper. Mirkka feels at home when singing soulful blues and when following the footsteps of Etta James.
The band includes Riku Karvonen (guitar), Joonas Tuuri (bass), Henri Mäntylä (piano) and Severi Sorjonen (drums).
23.00 Fat Mama Band
Fat Mama Band´s music is a mix of interestings and entertaining sounds of "dark" music where rhythm & blues based sounds have an added touch of soul, jazz, funk and rock.

Rinnetupa Blues Suonna Kononen & Arto (Pilli) Pajukallio from 13-17 free entry
Break Sokos Hotel Koli, Grill It Restaurant
20.45 Echo Räsänen and Friends
Echo Räsänen & Friends With Benefits is a group assembled based on Räsänen's solo album "Song of Spell". The band consists of Pertti Feller (percussion) and Sampsa Asikainen (bass) and Echo (voc, guitar, banjo).
21.45 Blues Bastards
Blues Bastards has been playing blues for over two decades. Blues was a clear musical choice for the group from the very beginning. Their set includes for example Muddy Waters, Buddy Guy and T-Bone Walker's songs. This original and soulful blues also has some sounds from rock and is rich on guitar music.
23.00 Steve West Weston & Tomi Leino Trio
English singer and mouth organ player Steve 'West' Weston is one of the leading mouth organ artist in Europe's Blues world. He has a long career on blues stages and his background includes for example collaborations with The Who band's singer Roger Daltrey and guitar player Wilko Johnson known from Dr. Feelgood. Weston's latest album "West Street" got plenty of recognision around the world. An American blues production Blues Junction chose the album as the best blues album of the year. West combines elements from traditional Chicago blues, swing and rock'n'roll and is known from the energetic live performances.
Weston performs in Finland together with Tomi Leino Trio which is one of Finland's most known international roots assembly. Weston and the trio have a long history of touring together.
Sound specialist: Jani Salomaa
Host: Cane Vuorijoki
BLUES BUS FROM JOENSUU on the 16th and 17th of September 2022. Bus leaves in front of Original Sokos Hotel Kimmel at 5pm. Price of the bus will be informed later.
Tickets 24€/day or 45€/2 days (with S-Etukortti Card 40€/2 days). For our guests staying at the hotel the tickets are included in the room price. Without purchasing the ticket you can dine in the restaurant until 7pm. Tickets to Ruska Blues will be added to restaurant reservations booked after 7pm on the event days.
Welcome!