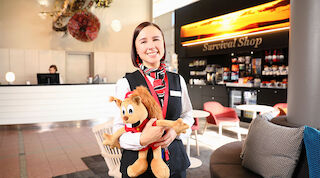 Things to do and see in Rovaniemi

Rovaniemi, the official home town of Santa Claus, is a unique destination. Urban city life is embroidered with Lapland traditions and culture, and fascinating nature – very near the city centre. Here are some Rovaniemi tips for you.

You can see the Northern Lights in Rovaniemi on dark and bright nights from autumn to spring. The nights in Lapland absolutely stunning. You can experience the magical Northern Lights under the starlit sky on dark evenings in Lapland.

Ounasvaara is not only a well-known sports centre, but also a year-round recreational area near Rovaniemi city centre. In winter, you can ski downhill and cross-country in Ounasvaara, feel the speed of the winter sleigh track, or go snowshoeing. In summer, you can go hiking on Ounasvaara's nature trails, rush down the hill on the summer sleigh track, or play golf.

You can meet Santa Claus and cross the magical Arctic Circle every day at the Santa Claus Village in Lapland in Finland. When Santa Claus declared Rovaniemi as his hometown, he told how his home at Ear Mountain (Korvatunturi) was revealed at the beginning of the last century and how this closely guarded secret spread the world over. In order to retain the privacy of his secret location, the Elf folk decided to build a place where Santa could meet people from near and far at the Northern Arctic Circle. Santa Claus spends his time at the Santa Claus Village every day of the year to take care of his mission in life; to enhance the wellbeing of children and the kindness of grown-ups, as well as spreading the message love and goodwill of Christmas Spirit throughout the globe. Rovaniemi is The Official Home of Santa Claus.

Art opens the world from a northern perspective in the Korundi Cultural Center in Rovaniemi. In the home of the Lapland Chamber Orchestra and the Rovaniemi Art Museum, art experts and artists meet. Korundian art exhibitions, concerts, gigs and club nights encourage you to indulge and inspire thinking. Collect your own collage from our rich cultural offerings.

At the Science Centre Pilke exhibition you will have the opportunity to explore the forest with all your senses and from many different angles.

Arktikum is a science center and museum that brings you northern nature, cultures and history close to you.Arctic actors, the Arctic Center at the University of Lapland and the Provincial Museum of Lapland are working for the North.The Arctic Center of the University of Lapland conducts internationally acclaimed and multidisciplinary Arctic research. The Provincial Museum of Lapland is an expert in Lapland culture, prehistory, history, building tradition and nature.

Children of all ages and the young at heart can join in on the fun, inspired by Angry Birds. The Angry Birds Activity Park has a ropewalk, slides, swings and climbing frames, all in the style of the very popular Angry Birds. The park is located on the riverbank, within walking distance of Rovaniemi city centre.

During the time of the midnight sun (also called nightless night or polar day), the sun never sets below the horizon. In other words, it shines 24 hours a day. This natural phenomenon is caused by the inclination of the earth's axis in relation to its orbit. It only exists in the latitudes from the Arctic Circle northwards. The closer you get to the pole, the longer the polar day lasts. If the atmosphere did not refract light, the Arctic Circle would be the boundary at which the centre of the sun reaches above the horizon for 24 hours on exactly one day, namely the summer solstice on 21 or 22 June. However, thanks to the size of the sun and refraction, from Rovaniemi at least part of the sun can be seen above the horizon for approximately one month, from 6 June to 7 July.

Good places for watching the midnight sun close to the city centre in Rovaniemi include the Jätkänkynttilä and Ounasjoki bridges, the riverfront of Ounasjoki outside the Arktikum, and the top of Ounasvaara. The midnight sun is visible whenever the weather is not too overcast. Even cloudy nights, however, are bright from late May to mid-July.