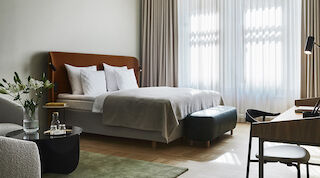 The classic hotel Solo Sokos Hotel Torni, originally opened in 1931, and now completely renewed, will open on April 12, 2022. The new Torni has invested in unique and impressive interior design, personal service and high-quality restaurants, and will become the flagship hotel of the S Group.

Renovated Torni will comprise five high-class restaurants. The modern brasserie OR, located at the corner of Yrjönkatu and Kalevankatu, will be serving vegetarian and seafood dishes made from high-quality seasonal ingredients. The restaurant's specialty will be an impressive raw bar, allowing you to try oysters, various appetizers and desserts. The city's first rooftop bar, the Ateljee Bar, has been converted into two floors, where you can be treated to breakfast and afternoon tea in true Torni style, while enjoying the best views of Helsinki. The first American-style cocktail bar in Finland, the American Bar, equipped with a curved bar counter, has been moved to its original place under the cupola roof, where cocktails will be served by Son of a Punch, known from several hot spots in Helsinki.

- Torni is an iconic Helsinki landmark, and the recent changes showcase its uniqueness in every single detail. The largest investment is, however, caring for our guests: guests' needs will be our priority, both before and during their stay. I am convinced that Torni will be one of the top hotels in Helsinki, says General Manager Juha Maatala.

In addition to Torni, another classic Helsinki hotel is also undergoing a transformation. High-quality Solo Sokos Hotel Helsinki will open its doors on May 10, 2022 at Kluuvikatu 8 in the heart of Helsinki. The new Hotel Helsinki, originally completed in 1930, is a tribute to the city, which can be seen in the many details, such as its unique wallpaper designs.

Two new restaurants will be opened on the street level of hotel Helsinki, serving residents from early morning to late at night. Pauli's Pizza & Grill will be serving pizzas until late at night, and Bar HKI will be open around the clock. In summer, guests will be able to enjoy the terrace under the linden tree at the corner of Kluuvikatu and Yliopistonkatu. The hotel will, in addition, open a new high-class event venue, Blomstedt for up to 200 persons.

- Hotel Helsinki will follow the internationally popular trend, where the hotel's restaurants and reception form a coherent whole, allowing you to order a beer at the same counter where you check in to the hotel. Our newest Solo hotel has been created for customers who are looking for vibrant city life and individual experiences, Juha Maatala explains.