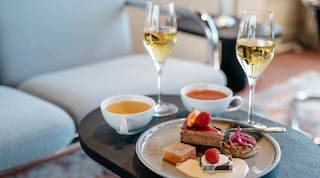 The new Torni with its visual details served as the starting point for Alanko's compositional work.

The story of Torni is also told through music

The music played in the shared areas of the hotel is by Petri Alanko, a Finnish composer. Alanko's musical work is the soundtrack of Torni, the hotel milieu, details and surroundings, meaning that it tells the story of Torni though music.

‘From the beginning, I was impressed with the passionate and ambitious attitude the renovators of Torni have for renovation and the opportunities it gives. I immediately wanted to take part in building the desired experience. Visual cues are an important source of information for me. The new Torni offered me a fascinating starting point for composing,' Alanko says.

‘Torni represents the rich Art Deco style that takes plenty of influence from jugend, functionalism and cubism. To reflect these nuances of the atmosphere and milieu, the music also needs bulk and variation.

The ambition in creating the renewed Torni, as well as the colours and varying graphics used in the hotel, brought the idea of using a horn section. The metal shades of bronze, brass and gold found in the Torni milieu also supported the use of these shining instruments.

Torni's musical artwork depicts the events of a day at the hotel, from the lingering morning hours to the clinking of champagne glasses to the moment when sleep takes over.

The majestic hotel and its 360-degree view become auditory in the composition. Torni's music tells what landmarks can be seen when viewing the city to the south of the hotel, and where the landmarks are located.

The musical work also depicts Torni as part of a continuum, both nationally and stylistically. The music awakens an image of an eternal landmark that endures all hardships without faltering.

I hope the music doesn't leave anyone cold. It would be nice to see people visiting Torni sensing that the music enriches the whole experience specifically in Torni, and that hearing the music in another place would not have the same effect.