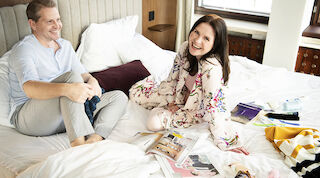 Reservations can be made as usual for all S Group hotels

All our hotels offer safe accommodation.

The well-being of our customers and staff is of utmost importance to us.

S Group hotels that are open or are about to be opened:


The following hotels are closed until further notice. We will inform about opening plans as soon as possible.

Our new cancellation terms apply to all accommodation bookings made between 15 March to 31 May 2020. You can now cancel your booking without incurring cancellation fees by 6 p.m. on the day of arrival. If you've already paid for your accommodation, we'll reimburse the deposit. According to your hotel's availability, you can also change the dates of your booking free of charge for any date through to 31 December 2020.

If you have a reservation for a hotel that is currently closed or is about to close, you will receive a new booking confirmation from the hotel to which your reservation has been transferred. If your booking is not transferable, we will contact you by phone.

In addition to that we accept cancellations during large events that are being cancelled due to Corona COVID-19 situation as example festivals, concerts and sport events. Prepaid reservations made for these large events can be either moved to another date, to following year's event or cancellation with refund if accommodation was originally booked until July 31st 2020.