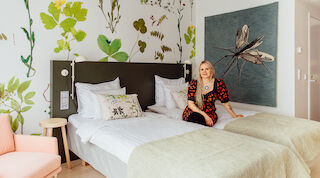 Located in the centre of Helsinki, this iconic hotel will move on to a new era, as it will be transformed into a hotel representing Finnish phenomena through stories. The new concept has been designed by Paola Suhonen and Ivana Helsinki, while the design agency KOKO3 has been responsible for the interior design. The hotel will be modernised in stages, and it will be completed in 2018.

In the visions of Paola Suhonen, the new Presidentti is a clever interpretation of a modern Finland of contrasts, a country of bright summer nights, as well as frost and ice. Suhonen's interior decoration concept plays with northern atmospheres. The Scandinavian and arctic dimensions are boldly mixed with Finnish characteristics.

"What we are lacking is a hotel with a special story and atmosphere, where Finnish qualities are combined with the exotic. There are more than enough design hotels and boutique hotels all over the world. Many hotels have integrated Finnish design into their interior decoration. We wanted to create a complete concept, where the Finnish atmosphere and stories are present everywhere," Paola Suhonen says.

"I designed a large range of emotions for Presidentti. After all, the hotel must be interesting to seasoned business travellers, tourists visiting Finland and Finnish holiday travellers," says Suhonen, explaining the starting points of the design process. "Through different atmospheres, each visit can also be experienced in different ways."

The current trends in the interior decoration of craftsmanship and authenticity will also have a strong presence in the new look of Presidentti. The hotel rooms will only be furnished with decorative items designed specifically for Original Sokos Hotel Presidentti, such as hand-tufted rugs and various thematic wallpapers. Public areas, such as the lobby, will also feature unique design.

"Hotels of today must be able to offer strong experiences to their guests through service and the physical setting. Our objective is to have a hotel which leaves strong imprints on our customers' minds, a hotel which may even be a tourist attraction in itself," says Hannele Laurila, hotel manager of Original Sokos Hotel Presidentti. "We believe that, through the creative input of Paola Suhonen and the solid expertise of KOKO3 in interior design, we can reach this objective."

The new entrance floor to be opened in late autumn 2016 will invite guests to a world of stories. The lobby plays with the combination of raw timber and copper, with a catwalk leading to the conference floor opening up in the middle. The modernisation project will be carried out, while paying homage to the history of the hotel. As a result, the conference floor will feature Finnish presidents, led by Urho Kekkonen, who originally opened the building.