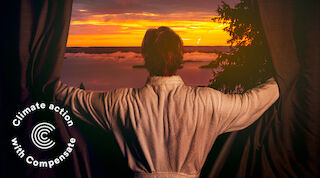 Sokos Hotels was the first hotel chain in Finland to join the emission offsetting programme offered to private customers. During the first year, the funds accumulated through the programme have been used to conserve and plant forests, create new carbon sinks, and develop innovations for carbon sequestration.

"Our customers were requesting voluntary offsetting, and this possibility has clearly been received very positively. During the first year, we've already offset the emissions of thousands of hotel stays and breakfasts. Offering offsets is a natural continuation to our impactful and long-term sustainability work," says Jukka Kaartinen, Development Manager with SOK's travel and hospitality business chain management.

The offsets from the year's hotel guests have been used to sequester an amount of carbon equal to the emissions of driving more than a million kilometres in a car.

The price of offsetting at Sokos Hotels is currently only EUR 0.47 per night in Finland and EUR 1.22 in Tallinn. The prices are based on average emissions per room. The prices are low because the electricity used by all Sokos Hotels is produced with renewable sources, and the energy efficiency of the hotels has been steadily improved for years. In practice, the only things to offset are the emissions produced due to breakfasts and heating the property.

The offset paid by customers for their emissions does not affect S Group's own climate work.

"The offsets are an additional service offered to customers by hotels so that customers can reduce their own daily carbon footprint themselves. The offsets paid by customers are not counted as part of S Group's own climate goals," Kaartinen emphasises.

The climate goals S Group has set for its own operations are ambitious. In 2015–2020, the retail group reduced the carbon emissions of its operations by 70 per cent. In addition to its own climate action, S Group has challenged its suppliers to reduce their carbon emissions as well by a million tonnes in total. The Big Deal challenge has already been accepted by more than a hundred companies.

The funds collected through the offsetting programme are used to fund projects in which carbon already released into the atmosphere is sequestered in forests or the soil. The offsets of Sokos Hotel customers have been allocated to projects in Europe, Asia, Africa and South America.

"Emissions have been offset by measures such as developing innovations in new kinds of carbon sequestration with kelp, reforestation projects in Kenya, and protecting large wetlands on the southern coast of Borneo in Indonesia," says Kaartinen.

You can learn more about offsetting projects carried out by Sokos Hotels and their results in our report, which is updated regularly.

For more information on projects that Sokos Hotel customers have supported by offsetting their hotel stays:

In addition to climate benefits, the project also helps stop the warming and acidification of oceans, which have negative effects on ocean ecosystems such as marine life. The negative effects of ocean warming also affect various societies and people whose livelihood is based on fishing. The Running Tide project thus brings a variety of benefits for the climate, ocean ecosystems and fishers. The project could be called an innovative carbon sequestration project, which is a new kind of alternative that can be used in parallel with reforestation and forest conservation projects.

TIST (The International Small Group and Tree Planting Program) is an award-winning reforestation project that also supports sustainable development. The project is currently active in Kenya, Uganda, Tanzania and India, and more than 76,000 farmers are participating in the project in Kenya alone. Women account for 35,000 of all the participants in the TIST project. The project's participants have planted more than 10.5 million trees and 4.5 million saplings so far.

TIST supports all the UN's sustainable development goals. The farmers participating in the project own the land and the trees they plant, and they can freely choose the types of trees they plant. The participants are paid eight dollars for each tree planted, and they also receive 70 per cent of the profits of the carbon credits sold through the project.

The Rimba Raya project seeks to conserve 47,237 hectares of unsettled wetlands on the southern coast of Borneo in Indonesia. Although wetlands only cover about three per cent of the Earth's surface, they sequester twice as much carbon than all the planet's forests combined.

Without this conservation project, the wetlands would have been exploited as a palm oil plantation, meaning the area would have been slashed, drained and burned. The area is not only a significant carbon sink but is also home to an orangutan conservation project and 50 other endangered species. These species would probably not have survived if the wetlands had been converted to a palm oil plantation.