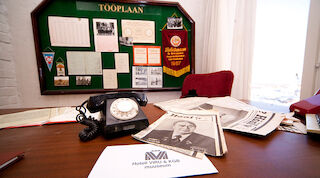 Museum Hotel Viru and the KGB
Once upon a time, there was a hotel called Viru. The year was 1972 and a little less than 20 years remained until the end of the Soviet era. The hotel for foreigners also had to suit the national security body – KGB …

Welcome to the world where an hour spent will make the two parallel worlds of the Soviet time understood and tangible!

In one, which mainly existed on paper, happy Soviet people lived in abundance and friendship under the wise leadership of the single party with no accidents or catastrophes in it, let alone sex.

The other, the real world, was considerably more versatile and complicated in nature.

Entrance with our tour guide only.