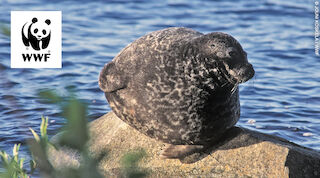 Some years ago, we had a discussion about what is that one thing that sets us apart from all other hotels. The discussion ran hot. We sometimes start to take the most important things as granted, so it took some time for us to realise that the obvious answer was right in front of our eyes – Saimaa! Lake Saimaa is what we are all about. The lake is only around 500 metres away from our hotel. We are nearly embraced by it.
We want to deepen our connection to the lake, so when the time came to plan our charitable operations for the coming year, it was obvious what we wanted them to be.  We wanted to help protect the Saimaa ringed seal.
Original Sokos Hotel Lappee helps the WWF in its work to protect the endangered Saimaa ringed seal.
The WWF has worked to protect the species since 1979. The foundation produces information, funds research, steers decision-making concerning the species, provides environmental education and takes active action to help the Saimaa ringed seal survive. Thanks to the protection efforts, the numbers of Saimaa ringed seals have remained at a steady level and even increased.
We want to help raise awareness.
As a tribute to our beloved seal, we have set up a Superior room with a suitable theme. It is called Lumi-kuutti, i.e. seal pup on snow. The number of the room is 3005. The room features a cute-as-can-be picture of a seal pup relaxing on the ice of lake Saimaa in spring. The picture was taken by a Saimaa ringed seal advocate, documentarist, nature photographer and author Juha Taskinen.
Discussions have a tendency of making things happen. The internet, YouTube and books are all full of interesting and entertaining material on the Saimaa ringed seal. We strongly suggest everyone to have a look! Individuals can also help protect Finland's national treasure by donating what they can to the protection efforts of WWF or Finnish Association for Nature Conservation, for example.
Saving the Saimaa ringed seal from extinction is a matter of honour for Finns. Original Sokos Hotel is a strong Finnish organisation, which makes it a matter of honour for us as well.