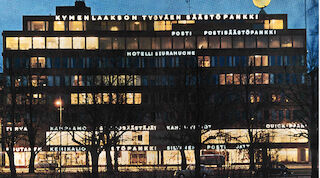 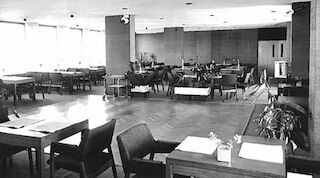 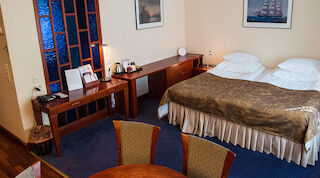 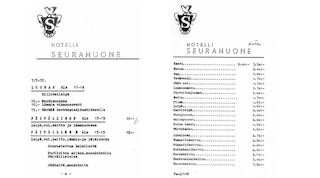 On 5 October 1961, a new and modern hotel restaurant Seurahuone opened its doors in Kotka. The old Seurahuone by the harbour was destroyed in a bombing during the Continuation War. Seurahuone used the newly built Säästötalo for their reception on the ground floor, seventh floor restaurant and one and a half floors for hotel rooms, which were "all suitable for television connections". The building was designed by famous architects Kaija and Heikki Siren.
A window table at Seurahuone's restaurant, on the seventh floor overlooking the Keskuskatu street, was a matter of status in the "old restaurant". The "place for dining and dance above everyone else" is also remembered as Katariinan Sali, the restaurant Rosa, Iltaravintola Seurahuone and Kameli-disco.
"We were standing in the queue to Seurahuone and freezing. We were also hungry, and as the Talvitie hot-dog stand was closer than a steak at Seurahuone, one of us picked up sausages with fries and all the extras for our entire group. When we finally got to the door, we told the doorman that we had come to eat. The doorman pointed out that we seemed to have brought our own condiments with us and gave the lads clean ties to wear."
The hotel in the centre of Kotka lives with the city's business life and changing restaurant culture. The first decade was an era of white tablecloths. Hotel Manager Ruth Karas was the grand lady of Kotka's restaurant scene in 1960–1970. Everyone called her Mrs Karas, even those who were on first-name terms with her.
"Before cheques and bank cards, it was normal for customers to eat and drink ‘on the slate', which meant that bellboys had to visit them the following day to collect their debts. Alcohol legislation prohibited selling alcoholic beverages on credit, so they didn't waste time with the collection."
As was common at the time, men and women had to follow dress codes, which were specified by law. Gents wore a dark suit and a tie; a mixed set of jacket and trousers was not acceptable. On no account were ladies allowed to wear trouser suits. A single female customer could have "a quick lunch in the function room", but by dinner time, she needed to be accompanied by a man.
"No wonder the retired waitress was outraged when she wasn't allowed to enter the new Seurahuone in her black designer trousers. After all, she had worked at the old Seurahuone during the war – wearing her athlete brother's tracksuit."
In the 1980s, Seurahuone got a new device that could receive a document
electronically, even from the other side of the world. The sales secretary sat waiting for something to happen. When the device started up, she leant over it and said: "Kotka Seurahuone's fax machine, good afternoon."
The main purpose of the hotel and restaurant is to serve their customers on both special and everyday occasions. For the personnel, even the everyday occasions have not become routine. Once, when none of their guests arrived, an event organiser spent the two hours they had booked for their customers by giving a lecture to the personnel.
"A certain excellent floor attendant always came to the rescue when there was a foreign customer, no matter which language the customer spoke. The ‘interpreter of floor attendants' managed to solve all problems. After all, they were from the Savo region and only spoke Finnish and the Savo dialect."
"Three inmates had escaped from a prison in Hämeenlinna. They came to Kotka and visited Seurahuone, as they had probably heard the phrase ‘From Kotka with greetings, where proper lads won't get beatings'".
The men were wanted by the police, and a sharp-eyed receptionist recognised them and called the police. The fugitives had ordered drinks to be sent to their rooms, perhaps something to eat as well.
Room service came by, followed by the police. Two waitresses wanted to watch how the police arrest fugitives. They observed the situation whilst wearing wine coolers on their heads. The brave women thought that perhaps the arrest would lead to a shooting, and they should be prepared. If other guests had seen them wearing the coolers as hats, what would they have thought?"
"President Mauno Koivisto and Mrs Tellervo Koivisto spent a night at Seurahuone in 1986. For breakfast, the two eminent guests wanted porridge, coffee and Danish pastries. The on-duty breakfast chef didn't dare to season the porridge, in case it would become too salty. This challenging task was left to the restaurant hostess."
"The kitchen is the heart of a restaurant. Sometimes, exciting things happen in there. Until the 1980s, menus were extensive. Customers were free to choose something ‘off-menu', and their wish would be fulfilled. One of the regulars demanded hand-grated vegetables, sunflower oil and herb salt. Another customer enjoyed rice gruel, black bread and chunky slices of ham. Grilled salmon fins and Marski's traditional vorschmack were popular choices for a midnight snack. Once there was a customer who wanted their whisky to be served with buttermilk. Another, a dab of sweet whipped cream on the side of their herring platter."
Famous artists have always performed at Seurahuone restaurants, so naturally so has Kotka's own Juha Watt Vainio. Late one night, "Junnu" left his hotel room to visit the hotel reception desk. He wanted to borrow a typewriter and paper. Perhaps he created one of his evergreen songs in a hotel room at Kotka Seurahuone.
These days, Sokos Hotel Seurahuone in Kotka has 164 hotel rooms and three restaurants. You can find many options for business or leisure visits, from food and drink to entertainment, top artists, conference facilities and saunas. The hotel also offers several hotel packages that include admission to the area's best travel destinations.