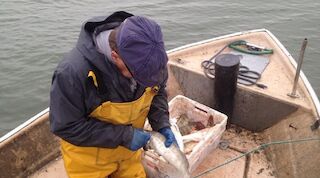 Every movement Hannu Lahtonen makes betrays his long experience as a fisherman. Lahtonen's calm and measured working method sits will in the beautiful, idyllic archipelago, where the man goes every day to inspect the nets and fykes he has set. He can easily remember where they are, as the Turku archipelago has become his second home during the years. He is familiar with every island, bay and cape of Airisto and knows his neighbours on the waters just by the sound of their motors. The Friends of Gunnar were allowed to climb on board with the fisherman for one day.

As a fisherman, Hannu represents true small-scare production: one man and a boat, nets and fykes, and a small smoker box are everything he needs. Lahtonen supplies fish to Kalaliike S. Wallin almost every day, and Wallin sells the fish forward directly to consumers or the restaurants in Turku – in the future, also to Gunnar's table. Hannu's selection currently includes mainly perch, whitefish, zander and pike, which he sells forward as whole, unscaled fish. If necessary, they are cleaned and filleted by Wallin. For his own use, Hannu catches fish a few times a week, otherwise the Lahtonen family eats game they have caught.

At the moment, there are only three active fishermen remaining in the archipelago areas near Turku. In the entire coastal region, there are about 300 fishermen: the number has halved during the past decade. There are no EU subsidies to be had and great cormorants and the multiplied seal population significantly taxes the numbers of white fish, in particular. Before, when Lahtonen had two fishing partners, they could get so much fish from these same locations that those that were kept whole were hand-picked and the rest of the fish were processed into a mass. Today, Lahtonen checks his nets and fykes alone.

The times have changed, but Hannu Lahtonen still remain behind the helm of his boat and delivers his daily catch to Turku Market Hall. The real work that goes to catching one fish can only be understood when one goes fishing with Lahtonen, such as the Friends of Gunnar and Restaurant Manager did. When one knows the background of the fisherman and fishing, one sees the fish dish brought to the table in a whole new light. And that is why Gunnar wants to serve the fish sold by Kalaliike S. Wallin, caught by Hannu Lahtonen in Turku's Airisto. This way, the restaurant shows its respect to local small-scale producers.