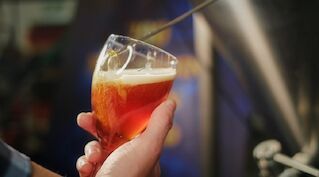 Aimo and Peetu Sillanpää presented their unique microbrewery with well-deserved enthusiasm. Passion for making beer and decades' worth of experience of astronomy guaranteed that the visit to Tuorla was unforgettable for all the Friends that were present.

Personalised beer from a unique brewery

Right in the beginning of the visit, the Friends of Gunnar realise that this is not your ordinary microbrewery by any standard. For one, the King's Road Brewery (Kuninkaantien panimo) is located in the Tuorla observatory. For example, the shows in the planetarium can be watched right beside the brewery equipment, behind a curtain. And the brewery equipment themselves are in a unique location: the platform on which the boiling and fermenting containers stand is in fact a large table. The largest 'floating' mirror currently in space was honed on this table.

Aimo Sillanpää says that at the beginning of the 2000s, Tuorla observatory beat NASA in a tendering and was ordered to work on a 3.5 metre mirror that ended up being used in Herchel telescope. This project of several tens of million Euros was completed on this table, which is now used for brewing beer.

Beer has been brewed at Tuorla before, but the story of the King's Road Brewery started in 2016, when the members of Piikkiö Rotary Club asked brewmaster Niko Hurskainen to join the operations.

With the new alcohol act, the team has set a new goal, in addition to brewing beer: opening their own store.

"Our shop will be opened in the area, maybe even in a van," says Peetu Sillanpää, who is in charge of marketing.

Passion plays a large role in a small team

The idea of establishing a brewery gained ground at a beer festival in the Czech Republic. For this reason, the beers of King's Road Brewery are central European and traditional in style.

According to the brewmaster, the next steps for establishing the brewery were receiving the permits and the decision of arranging an issue of shares. The brewery shares were sold within moments through Piikkiö Rotary Club, and finding 100 stockholders ensured that the brewery could acquire decent equipment. The bottling machine, for example, was a big step in the commercial production of beer. Peetu Sillanpää explains that the bottling machine guarantees uniform quality and taste of the sold beers by minimising the amount of oxygen in the bottle.

The company shareholders assist the brewmaster in the manufacture process, so no other hired staff other than the brewmaster have been needed thus far. Just the visiting Friends and the Restaurant Manager fill up nearly the entire table top acting as the brewery, so there cannot be too many people around during the brewing process, either.

Aimo explains that they use alternating teams. At the moment, there are three shareholders in charge of the decoctions, one shareholder at a time is in charge of one decoction with a few assistants. Usually, there are only two people around during the decoction process, and one people is responsible for the fermentation. Bottling is the most laborious stage of the manufacturing process, demanding the presence of three shareholders. However, Aimo and Peetu are quick to add that cleaning and facility maintenance are, in fact, the most difficult parts of the process.

This is the crew needed to operate equipment that have a theoretical capacity of a 2,000 litre beer production in six weeks. In addition to the bottling device, the equipment consists of one 500 litre decoction container and four 500 litre fermentation containers. And if you ask Aimo, their beer is made with star power; the brewery's electricity is produced with solar panels on the roof.

Historical day in the production

All the beers of this brewery follow a classic, old German beer law (Reinheitsgebot). This ordinance, released in 1516, dictated that only water, barley (malt) and hops were to be used for brewing beer. The fourth ingredient, yeast, was not mentioned in this original decree, as its existence was not understood until the 19th century. Still, all the beers of King's Road Brewery are made of these four ingredients. The only ingredient bought from abroad is hops. They are eagerly waiting for Finnish alternatives to hops, as the rising culture of microbreweries has led to an increasing interest in growing hops. Hops has a great growing environment in Finland – up until 1915 it was even stipulated by law how many hop poles a household needed to grow.

The first product of the King's Road Brewery was Tuorlan Tähti. This fresh and light pilsner that honoured traditional Czech styles was their game opener. The second beer of their selection, Tuorlan Tumma (German-style dark lager), received its inspiration from the ale drunk in the feasts of the Kuusisto Castle in the 15th century.

The visiting day (28 September 2018) went down in the brewery's history, as the first bottling of its third beer began during the visit. The new beer is an American lager, and the brand new label revealed that its name is Tuorlan Taival.

The Friends and the Restaurant Manager were particularly interested in how such different types of beers can be made out the same four ingredients. By modifying the malt and changing the variety of hops, it is possible to make endless varieties of beer types, was the explanation provided by the brewery staff.

After the extensive briefing, the Friends of Gunnar had the chance to sample all the three beers of the King's Road Brewery, for the first time ever.

As the lightest beer, Tuorla Tähti took its rightful place as the first beer to be sampled, and after tasting it and Tuorlan Tumma, the Friends and the Restaurant Manager were sure that these beers need to be included in Gunnar's selection.

"This is a beer that challenges the taster," stated Friend of Gunnar Heidi Wirkkala.

Everyone agreed that the rich, balanced flavours would suit Gunnar's dinner table very well. "In addition to wine recommendations, also beers best suited to the dishes must be considered at Gunnar," the Restaurant Manager Sami Kivirinta stated.

In conclusion, these beers, manufactured with 'astronomical experience', will definitely be seen in Restaurant Gunner's bar and in the restaurant. The stories and passion behind the beer are a perfect addition to Gunnar's values. The brewery is less than 20 kilometres away from the centre of Turku, so the customers visiting Gunnar should also consider a visit to this unique place.