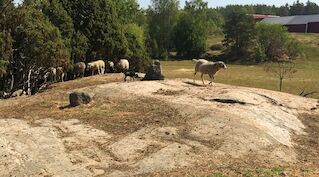 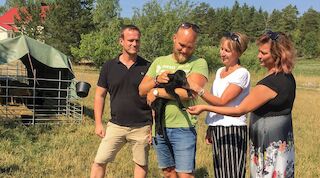 A lamb carrying the name of Restaurant Gunnar was born on Sikka Talu's farm. The Friends of Gunnar went to see the still young, but very lively lamb on its home farm in Rymättylä. During the visit, the Friends also got to sample delicious yoghurt and velvety ice cream made from sheep's milk. The Friends were able to find use for these products right away in Seurahuone's restaurant.

"Using local ingredients is an important value to the restaurant. Additionally, we want to visit the locations to meet the producers and suppliers and hear their stories behind the products," says Gunnar's Restaurant Manager Sami Kivirinta. "The Friends of Gunnar, on the other hand, give important feedback on the products from the perspective of customers, as well as great ideas for how to use the products in the restaurant," says Kivirinta.

Sikka Talu's products are based on the wellbeing of their sheep

In the work of sheep farmers Katja and Alar Sikka, the wellbeing of people and animals is the most important value. As one example, Katja brings up the period of time a lamb is allowed to spend with its mother, drinking her delicious milk. This period of time can be up to two months long. "We don't do this just for financial stability, we do this for the love for the animals. I hope that the care and nurturing we show our sheep can also be tasted on the customer's plate," Katja Sikka summarises.

Endangered Åland sheep were selected to accompany the sheep farm's East Friesian dairy sheep. The choice of the the Åland sheep breed was self-evident to Katja and Alar, because they wanted to protect this Finnish native breed. The idea of products made from sheep's milk started from the great taste of the nutrient-rich milk of the East Friesian sheep. The milk can be used to make velvety ice cream and very delicious yoghurt. No cream made of cow's milk or separate thickening agents need to be added to the dairy products. The sheep milk is processed as little as possible: for example, it is not homogenised at all. In addition to the milk, the sheep farm also produces meat and beautiful, warm sheep skins.

The ice cream and the yogurt impressed the tasting jury.

Utu sheep's milk ice cream only contains sheep's milk, organic sugar and a naturally, organic flavour. "The ice cream tastes soft and thick and not at all woolly; rather, it is rich and has a perfect sweetness to my taste, it's not too saccharine," says Friend of Gunnar Paula Stam. Friend of Gunnar Arja Laajalehto values the vanilla ice cream even higher than Italian ice cream and exclaims: "This tastes exactly the way a vanilla pod smells like, wow!".

The ice cream has four different flavours: yoghurt and honey, vanilla, chocolate, and coconut. The Friends of Gunnar were satisfied tasting jurors and each of them praised the ice cream's excellent texture and the nice acidity of the yoghurt. With the Restaurant Manager, the Friends considered whether the ice cream and yoghurt could work as parts of Gunnar's product selection. Paula Stam was inspired by the idea that the same farm could also provide other products, such as sheep skins and meat. In addition to Gunnar, the ice cream and yoghurt are also sold in a few stores and through the Reko local food circle.

Fully black and with perfectly curly fur, the tiny lamb that was born on the farm just a few days earlier was given the name Gunnar during the visit. In time, Gunnar will grow up to be a ram that will have his own flock of ewes to take care of. Sheep farmer Katja hoped that the Friends of Gunnar could help her choose Gunnar's ear tag. "Should we put a pink plastic triangle or a metal loop?" she asked. The Friend Paula pointed out that the triangle reminded her of Tinky-Winky, a familiar character from a children's show. Thus, it was unanimously decided to choose the stylish metal loops. In the future, we will keep an eye on Gunnar's growth and life at the Sikka Talu farm and perhaps the ram will even visit us in Turun Seurahuone sometime in the future. Finally, we saluted Gunnar with the same milk that the ram will drink for the next six weeks.

Friends of Gunnar satisfied with the visit

It is important to a restaurant that the origins of an ingredient are known and can be proudly shared with the customers. Gunnar looked for six small producers in Southwest Finland, the products of which will be used in the restaurant. "It was great to be able to visit the farm and see that the products were excellent; the special favourites were yoghurt and vanilla ice cream," Friend of Gunnar Sakari Lehti summarises. Friend of Gunnar Aleksi Muurinen also said that the visit was an interesting and rewarding experience. "The opinion of the end consumer is particularly important to a producer, so it is great that the Friends could visit our farm," says sheep farmer entrepreneur Katja. Next, the Friends of Gunnar will sample Mustan mehiläisen hunaja, 'honey of the dark bee' on Tammirauma's Honey Farm in Rymättylä.