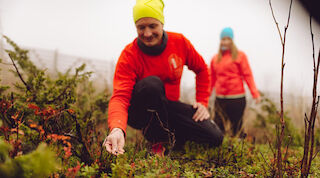 Finland's wilderness: Lapland and the North

So you want to get away from it all. Could there be anywhere better to do that than a region where you are just as likely to come across a family of reindeer as another person! But although the far-north province of Lapland has more space per square kilometre than pretty much anywhere else in Europe, its main gateway and provincial capital, Rovaniemi, served by an international airport and a regular rail connection with Helsinki and the south, is a lively hub. From here, a good road network extends north to winter sports and hiking resorts such as Levi and Saariselkä. It's also close to Sodankylä, home of the annual Midnight Sun Film Festival in summer.

The city's Culture House Korundi houses a modern art museum as well as a stylish concert hall, while the Arktikum museum and science centre showcases all-things-Arctic. This is also ‘Santa Central', attracting families to the Santa Claus Village on the Arctic Circle, as well as a base for husky, reindeer and snowmobile safaris and Northern Lights tours. Rovaniemi has excellent restaurants specialising in local cuisine, drawing on reindeer, game, Arctic char, mushrooms, and berries, including succulent and nutritious yellow cloudberries.


Further south, on the coast of the Baltic's Bothnian Bay, is Oulu, an important university city and the location of several museums, including the Tietomaa Science Centre and the Oulu Museum of Art. It's also close to the pastoral idyll of Hailuoto island, a World Heritage-listed site, and the Liminginlahti nature centre, frequented by migrating birds in spring - and the bird-spotters who come to check them out. As well as the well-appointed Original Sokos Hotel Arina, Oulu's accommodation options also include the stylishly renovated riverside Radisson Blu Hotel Oulu.

Heading east from Oulu, not far from the town of Kajaani, you'll reach Vuokatti, a wooded ridge with great views that lends itself to ski jumping and alpine skiing in winter and wonderful hikes at any other time. The indoor SuperPark activity park and DiscGolf are also options - and the Break Sokos Hotel Vuokatti is the perfect base, whatever your preference.