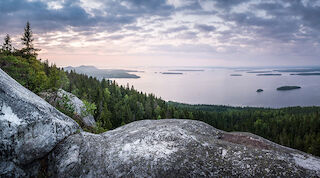 More than ever before, travellers are seeking accessible, beautiful and spacious destinations that combine the potential for year-round outdoor activity with comfortable and safe accommodation. And more than ever before, Finland fits the bill perfectly, not least in the vast regions of natural beauty in the east and north, and in its smaller towns and cities.

Finland's prime allure for travellers has always been based on its unspoiled natural environment, the ample room to roam that this provides - and the promise of somewhere excellent to dine and sleep at the end of the day. Venturing away from Helsinki's bustling cultural hub to explore the fabulous scenery does not mean sacrificing the finer things in life. The regions of North Karelia and Lapland, as well as provincial cities such as Lahti - Green Capital of Europe 2021, Oulu and Kotka, offer the ingredients for both relaxation and active inspiration.

North Karelia is a kind of Finnish emotional heartland, an area of ancient myths and legends gathered together in the narratives of the national epic, The Kalevala, by the poet Elias Lönnrot. It's also the heartland of the Orthodox Church in Finland, a reminder that the long border with Russia stretches along its eastern side.

Its lakes and woodlands are home to bears and wolves, none of which are likely to disturb a hike or a fishing expedition or a restful day idling in a lakeside cabin but which can be viewed on tailored safari tours. Draped with a carpet of white for three to four months of the year, it's perfect for cross country ski adventures.

Lapland, most of which lies above the Arctic Circle in Finland's far north, is described as Europe's last wilderness, soaring from craggy gorges and river valley woodlands to upland fells above the treeline. In winter, during the Polar Night or kaamos period, the snowbound landscapes are imbued with magical pinks and blues, while in summer the sun never sets for several weeks. Winter sports resorts come to life in season. From September to April, this is one of the best and most accessible regions for viewing the unforgettable spectacle of the Northern Lights.

In autumn, during the ruska season when the shrubs and trees turn to vivid reds and yellows, the long trails through the enormous National Parks make it possible to walk for days without encountering another soul. The tumbling rivers of the north are favoured by fishermen. The provincial capital of Rovaniemi, right on the Arctic Circle, is a lively cultural centre and transport gateway to the region, with superb restaurants and, naturally, a popular and hospitable Sokos hotel.