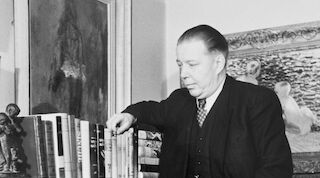 Writer Mika Waltari was a familiar guest at Torni's restaurants. 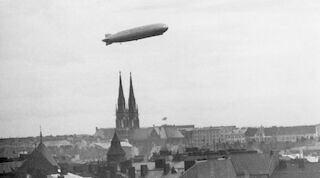 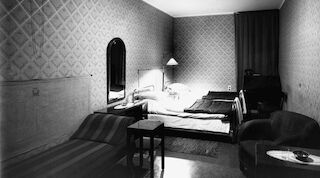 Over the years, many important guests – from royals to movie stars and writers to artists – have enjoyed the bohemian and international atmosphere of Hotel Torni.


Josephine Baker was a dancer, actress and singer who became famous in Parisian revue theatre. She visited Hotel Torni in December 1933. Baker had come to perform with a large orchestra in Helsinki and Turku. With six performances in Helsinki alone, there was plenty of hustle and bustle. The international star not only stayed at Hotel Torni, but also met reporters there between performances. Reportedly, she also wrote her Christmas cards in Torni's atmospheric milieu.


Perhaps the most interesting detail of the history of the Ateljee Bar is the access route to Torni's roof, which was opened in the 1930s. A docking station was also constructed for the German Graf Zeppelin that was visiting Helsinki at the time. The idea was that the zeppelin could land on the roof, and the airship passengers could descend a ladder to the bar for some cocktails. The zeppelin never landed, but the access route to the roof still exists. You will be able to see it on the ceiling of Ateljee Bar, next to the bar counter.

The writer Mika Waltari could often be seen in Torni's restaurants deep in conversation. He was a very peaceful visitor, unlike the Nobel-awarded writer F.E. Sillanpää, who was reportedly very loud and was every so often tactfully led into the cabinets because of it. Intellectuals favoured Torni, and their discussions have been recorded in a book entitled Pidot Tornissa.

Many famous people like Jean Sibelius, Freddie Mercury, internationally renowned actors and European royals have enjoyed their stay at Torni. A special request from one of these guests left a lasting impression especially on the staff members at Torni: the actor Roger Moore wanted only oatmeal and honey for breakfast. The story does not reveal whether he drank a Dry Martini at Torni's bar like the agent he played.

Lee Harvey Oswald, known as the man who shot President John F. Kennedy, visited Helsinki in 1959. He intended to defect to the Soviet Union. On his way, he stopped in Helsinki and stayed at Hotel Torni. Oswald continued his journey to Moscow, but his defection and the Soviet life he idolised did not last for long, because he was not given citizenship. He returned to the United States with his new family in 1962.

After the war, Helsinki city centre was occupied. The Soviet Union delegation of the Allied Control Commission operated in Hotel Torni from 1944 to 1947. The Russians also brought their own staff and cooks. There was a billiard hall in the cabinet with a view, and according to rumours, there was even a movie theatre in the premises. Life at Torni was quite restless, and the police patrolled outside the hotel throughout the day. In 1948, Torni was handed over from the Control Commission to the newly founded Liikemieshotellit Oy. A new, brilliant era of Torni began.