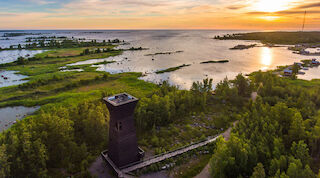 For Finns, summer is an eagerly anticipated annual reward, a time to relish the great outdoors in days that never seem to end. There's a special magic in the air. In these northern latitudes the Sun never wants to set and the options for visitors vary from leisurely lake and coastal cruises to cycle tours and hiking in the wide open spaces of Finland's many National Parks.

The country's distinct seasons each have their own special characters and opportunities for visitors, but few Finns would deny that the summer is when Finland is at its best. That's the case wherever you're spending time, whether it's in Helsinki or one of the provincial towns and cities across the country.

It's a season of festivals, when some of the quieter smaller towns burst into life after the long winter, welcoming global audiences as well as an eager domestic crowd. The Helsinki Festival kicks off in August, taking advantage of the capital area's excellent range of venues, with performances at the Music Centre and Finlandia Hall, for example, and offbeat ethnic music at the specially erected waterside Huvila pavilion. The city's new Amos Rex Art Museum is just one of many galleries and cultural centres, in addition to outdoor venues, contributing to the events across town. The Flow Festival, held in a former Helsinki industrial quarter, has grown into one of northern Europe's biggest rock music gatherings.

Further afield, Savonlinna, in the heart of eastern Lakeland, stages its world-class Opera Festival in the courtyard of its majestic medieval castle, as well as serving as the perfect base for lakeland adventures. The little west-coast town of Pori bursts into life for its July Jazz Festival while Sodankylä in Lapland hosts the Midnight Sun Film Festival.

Between enjoying these cultural treasures, visitors can sample the delicious seasonal culinary delights, including fresh fish from sea, lakes and rivers, and berries and mushrooms from the forest. Head to the fabulously scenic Åland Islands and other Baltic archipelagos for a cycling, fishing or boating trip, or take a trek across Lapland's wilderness.

Options are endless, and one thing is certain: you'll never be too far from the comfort and hospitality of a Sokos Hotel.