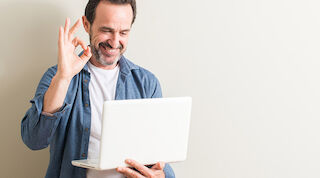 A professor was supposed to give a lecture to an audience of 50 people in our conference facilities. Guests had arrived from all over Finland. An hour before the lecture was supposed to start, the professor noticed that his PowerPoint presentation had been corrupted and he did not have any backups. Right in the middle of setting the tables and other work, Marko rose to the occasion and rushed to the professor's aid. Calmly and coolly, Marko remade all 30 PowerPoint slides from the professor's dictation. And voilá, the lecture was able to start on time. What an amazing save on an important day, both for the professor and the guests!
Marko, Original Sokos Hotel Lappee, Lappeenranta

Creating happiness on a sad Christmas

One Christmas Eve we received guests who seemed very sad. The couple's house had been destroyed in a fire the previous night. Now they had nowhere to stay. They came to stay with us for as long as it would take find a temporary home. Their sadness and sorrow were tangible. Their dog had also escaped during the fire, but luckily the pet was found later. We set them up in a larger Superior room.
The couple's nightmare before Christmas made Maukka from our reception think. How could we instil even a little bit of Christmas spirit into their minds? Maukka found and reserved two seats for the couple from our fully-booked Christmas buffet. The food and the drinks were on the house. We also tried to create some happiness by gifting them an accommodation gift card and a dinner on Second Christmas Day. It was served in their room, so the couple would not have to leave their dog alone.
They were very thankful and touched about the way we welcomed them into our hotel with open arms and helped them during their time of crisis. With some effort from every member of the staff, we were able to take good care of our guests.
Maukka, Original Sokos Hotel Puijonsarvi, Kuopio

At breakfast a customer told us he was heading out to Lapland to clean a friend's cabin. The customer was a bit sad that he would have to make his own breakfast the next day. Ritu read the situation and packed all sorts of delicacies from our breakfast table for the customer to take with him. Ritu also added a card wishing the customer happy cleaning. The customer was very pleased and thankful!
Ritu, Original Sokos Hotel Koljonvirta, Iisalmi

A picture full of sentimental value

A couple saw a picture on our restaurant's wall that I took. The picture featured their old house, where their first child was born. I sent them the original picture and gave them permission to use it as they saw fit. The picture had immense sentimental value to them, so they were very touched.
Juhis, Original Sokos Hotel Albert, Helsinki

One Monday night two men came in and asked for a room. I booked a two-bed room for them and asked where they were travelling to. They told me they were going to go to the river rapids to fish, but they got lost and did not find the spot.
One of the men looked at his watch (it was already after midnight) and told me it was now his birthday. While they were parking their car, I conjured the "Fisherman" a small surprise present that gave to him with a hug. The present included sports socks, a neck warmer and some local common roach in tomato sauce as a "catch" to take home.
Taina, Original Sokos Hotel Koljonvirta, Iisalmi

A group of men were having a sauna night at our VIP sauna. Everything was going swimmingly until the men noticed they had all forgot their hairspray and hair gel at home. They were supposed to head out to Helsinki's nightlife after the sauna.
One of the men called our reception and let us know about their distress. I promised to make it all better. I ran to the nearby store and got the men some hair gel, hairspray and even some mousse and took them to the sauna area. Each man's hair was in tiptop shape as they headed out.
Nadja, Original Sokos Hotel Helsinki

When a customer left for a festival, he forgot his important medicines in the hotel room. After finishing my shift I took the medicines to the gate of the festival and handed them to the customer, as he could not have managed without them.
Kirsi, Original Sokos Hotel Albert, Helsinki

Heating the car - and customer

During the freezing month of January, a customer, whose car heating system had broken down already a hundred kilometers before reaching the city of Seinäjoki, arrived at the hotel. The arrival time was quite late and all the car heating spaces were occupied, so the customer feared the car would not start in the morning.

The customer was extremely cold, so Anita in the reception immediately upgraded to room for one with a sauna. The customer went on to have dinner at the restaurant where he mentioned his car issues to the waitress, Sirpa.

Chefs Emmi and Mervi were leaving work and found there were now a few free heating spaces. They informed Sirpa about this development, who in turn informed Anita, who instantly called the customer's room. The customer got a heating space for his car to ensure it started in the morning, especially as temperatures of – 25 had been forecast!

The result of the team co-operation was a please customer and and a car that started in the morning, so that it could be driven to have service done.

The father of two small children was coming to stay at our hotel. He had wished for a quiet room in order to get good night's sleep. Kirsi at the reception arranged him a room in a quiet location, with an extra wide bed, and placed a card in the room, reading "Sleep Well". There was also a bottle of cold beer in the refrigerator.

The customer was very thankful for the effort and upon checking out left Kirsi a gift voucher for pizza as a token of appreciation.

Have a safe return journey

A Norwegian group of pensioners had stayed at the hotel and really enjoyed it. When it was time for check-out and the bus was waiting in the yard, Filloreta at the reception had an idea.

She grabbed a bag of Fazer blue chocolates and walked briskly towards the bus where all the Norwegians were already sitting, waiting for their departure. Filloreta entered the bus, grabbed the microphone and thanked everyone for the visit, wished for a good trip home and asked everyone to visit again soon. Everyone in the bus began applauding and commented that this was their best trip ever!