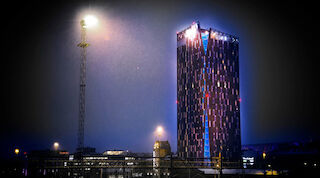 Art installation Signal surrounds the top of the 88-metre building. In addition, the right side of the main facade will be lit.

"Light has always played a significant part in the history of Tampere. After all, the first electric light bulb in the Nordic countries was lit at the Finlayson factory in Tampere in 1882. Because our hotel is a tribute to Tampere, we wanted to honour its history by presenting this art installation as part of our hotel and to light up the life of people living in Tampere," says Mikko Kankaanpää, manager of Solo Sokos Hotel Torni Tampere.

The content of Signal changes according to the season, the time of day and the day of the week. For example, it adds a new dimension to public events held in the city. A visual story of the history of Tampere will be the highlight of the day. It will be presented for the first time during the official hotel opening ceremony on 2 February at 5:30 pm, and every day afterwards every hour between 5 pm and 12 midnight. The changing content will be expressed by colours, shapes and the movement of light.

The art installation is designed by VALOA Design Oy, a lighting design company based in Tampere.