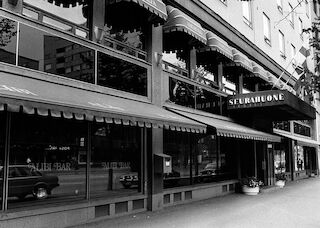 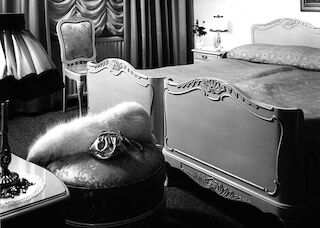 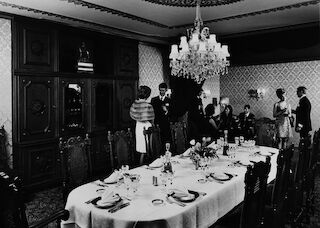 Behind every great story is a woman

It all began in 1871 when the first female entrepreneur and founder of the first restaurant in Lahti, widow Carolina Moesböll, was granted permission to run a bakery in the village of Lahti and "on the side, run a food and coffee shop for travellers". The first restaurant in the village was born. Later, Moesböll bought at the borough's first plot auction the plot number 37 located in the corner of Rautatienkatu and Vapaudenkatu (formerly Nikolainkatu), transferred her house on the plot and continued running her restaurant there until her death. At the same time, Lahti was gaining a questionable reputation with its wild goings-on. Especially at market times and other gatherings, carousing got out of hand as folk from all over Finland got together. In 1874, the crown bailiff ordered Cossacks to uphold peace, since the only policeman in the village was unable to do so.

Carousing and promotion of temperance

In 1893, beer sales were prohibited during market days and their eves in order to curb unruly behaviour. The decision calmed the situation but at the same time a regular policeman was appointed to specifically monitor the restaurant of Lahden Seurahuone due to the problems caused by alcohol. High-flung rumours spread about Seurahuone and the wild times continued. The temperance movement actively demanded that the Seurahuone should be closed down.

At the end of the 1890s, due to irregularities in accounting and embezzlement, the running of the restaurant was turned over to August Veltheim, who had been active in the business life of the borough and he ran it until the bankruptcy of 1903. The temperance movement increased interest in the adverse effects of alcohol abuse and alcohol legislation tightened. The re-establishment of the Seurahuone was wished for, since Hotel Lahti had been left as the only proper accommodation and restaurant licensed to to serve alcohol in Lahti. In 1906, Lahti became a town and the need to increase alcohol-licensed premises became topical. Seurahuone was finally resurrected in Rautatienkatu 4 in 1910.

From war to new ascent

Seurahuone ended up in the "Ahola's house" located in the corner of Rautatiekatu and Harjukatu. The First World War hindered its operations and its owners changed regularly. During the Prohibition in 1919, speakeasies flourished and moonshine flowed to the country from Estonia. Customers demanded strong spirits but law prohibited serving them. Consequently, the customers sipped spirits from their flasks and the waiters sold hard liquor on their own initiative without the owners' knowledge. Even though Seurahuone Ltd's Articles of Association were updated to comply with the times, changes continued and managing directors kept on being replaced.  Eventually, the Seurahuone ended up in the hands of Lahden Teollisuusseura ('Lahti Industrial Association'). After the prohibition was repealed in 1931 and after new alcohol legislation entered into force in 1932, Seurahuone received its strong spirit licence, "A serving licence", and it moved to its current location in the new and impressive four-storey stone building constructed by its owners in Aleksanterinkatu 14. The restaurant was located in the second floor of the building, the higher floors housed rooms for travellers and the club premises of Lahden Kauppaklubi ('Lahti Business Club').

Years rolled on and in the end of the 1940s, Seurahuone was given two more floors to become a six-storey building. Lahden Seurahuone became one of the most impressive and renowned hotel-restaurants in Finland. Evening dances were commenced and on the theatre premieres and concert nights dinner balls were organised. The service was of top quality and it was continuously developed. During its long history, Seurahuone has accommodated many famous figures from Marshall Mannerheim to Miss Universe Armi Kuusela, various royalty and other celebrities.  Due to skilled management, the image of the hotel strengthened through the years and the long-awaited bar was built in the first floor of the building in early-1970s. The place now houses the Bar & Bistro Seurahuone. In 2011, Osuuskauppa Hämeenmaa co-op bought the property from Lahden Teollisuusseura and the history of the building continues. This building truly has many stories!