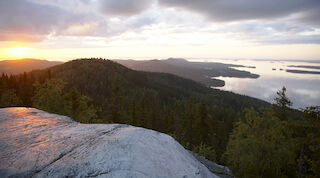 The ancient Koli and settlement

The hills of Koli are remnants of an ancient mountain range, the Karelid Mountains. The Karelid Mountains formed nearly two billion years ago when tectonic plates were pushed against each other. The hard quartzite rocks that were produced during the event have withstood the abrasion and weathering during the glacial periods better than their surroundings. The Koli area was settled in the 1750s.  At that time, people relied on the surrounding nature for their livelihood. Fields were cleared by burning woodland.  Settlement, the traditional slash-and-burn farming method and utilisation of the forest opened wide views into the national landscape that later became famous.

At the turn of the 1800s and 1900s, Koli was impressed into the minds of Finns by the works of artists such as Eero Järnefelt, Juhani Aho, Pekka Halonen, I. K. Inha and Jean Sibelius. Koli had become a symbol of the Kalevala scenery and the Finnish national spirit. During National Romanticism and Karelianism, Koli also became famous as a tourist attraction. Throughout the 1800s, people visited Koli primarily through Lake Pielinen and the harbour, until the Koli road was completed in 1913. The oldest signposted nature trail in Finland was opened in Koli on 12 July 1896. During the same summer, the first tourist lodge (the "High Lodge") was built in Koli.  At that time, Koli was already one of the most popular tourist attractions in Finland.  Koli also offered the possibility to enjoy downhill skiing after the first slope was opened in the late 1930s. The High Lodge, which was located on the spot of the present hotel, was extended in the early 1930s. A hotel wing was added to the High Lodge in 1967, and the actual High Lodge was converted into the present hotel building in 1970.