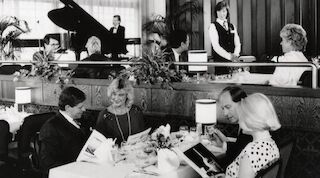 Welcome to an Original hotel!

Presidentti: Venue for Functions and Celebrations

In 1980, the Olympics were held in Moscow and it was expected that these international guests would come and stay even in Helsinki.  There had to be a hotel of international standards for these guests and this is how the story of Hotel Presidentti began. The President Urho Kekkonen and Prime Minister Mauno Koivisto opened the new hotel ceremoniously on the eve of the Olympic Games.

In those days, the specialities of Presidentti included the Carvery table, with its mouth-watering roasts, as well as Kino Kosmos, dedicated to screening Soviet movies. In the area now occupied by Bistro Manu, the legendary Café Maria operated in the 1980s and, in the 1990s, a casino complete with poker tables brought a cosmopolitan ambience to the hotel. These days, Kino Kosmos serves as our auditorium and the commotion of the casino is remembered in our Presidentti dining restaurant.

Today, Original Hotel Sokos Presidentti is a multifaceted venue for small and large events, from small meetings to spectacular gala evenings. Our younger guests can enjoy themselves in Onni the Squirrel's play area, as well as in our sauna and swimming pool.

We bid you a warm welcome to Presidentti!