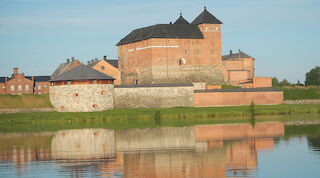 AT VAAKUNA, YOU`RE AT THE HEART OF HISTORY AND FINNISHNESS

Our hotel are located in Possentie, a street that was named after Knut Posse. During the 1400s, General Posse was castellan of the castle, which is only a short walk away on the opposite shore. Posse is famous for the  Èxplosion of Viborg, which occurred during the defence of Viborg Castle in 1495.

Our hotel lies at the heart of Finland`s first national city park, whose pleasant lakeside path offers fantastic opportunities for exercise and exploration.

The city of Hämeenlinna was established back in 1639, and King Gustav III of Sweden moved the castle to its present site in 1777. You can almost smell the history around the cobbled square, where you will find both the house where composer Jean Sibelius was born and the former provincial governor`s residence where Emperor Alexander II of Russian signed the Language Decree of 1863, which grated Finnish language the status of official language.

The city is not, however, stuck in its distinguished past. Today, Hämeenlinna remains at the forefront in many areas of development. Which is why we at Original Sokos Hotel Vaakuna have refurbished all of our rooms and set even higher targets for our service.

We want to combine the best sides of tradition and modernity, and offer you a warm and enriching visit to the shores of Lake Vanajavesi.