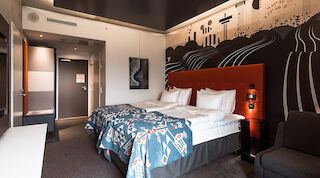 The architectural solutions of the hotel emphasise the towering height of the building and create a statuesque form. The number of floors cannot be counted clearly, as in traditional multi-storey buildings. The rough stone surface and the freely composed façade offer hints at the style of buildings in the centre of Tampere. The dark tone of the façade hints at the past of the old locomotive depots, while adding a bit of edge and a touch of drama. Built in 1874, the locomotive depots, which are protected by the National Board of Antiquities, have been renovated back to their original splendour.

The hotel's façade is decorated by the light art installation Signal which celebrates the history of Tampere – after all, the first light bulb in the Nordic countries was illuminated at the Finlayson factory in Tampere in 1882. A rarity in Finland, the installation depicts the variation of seasons and different times of the day through colours and rhythms of light. Signal surrounds the upper section of the building and illuminates the main façade.

The concept of Tampere is strongly present in the hotel's unique textiles, wallpapers and corridor materials. Furthermore, a phoenix, which represents regeneration and is one of the hotel's themes, comprises a fixed part of the interior design. The city's industrial history is reflected in the concrete used as a surface material in the rooms, and in the dark tile surfaces in bathrooms. The modern furniture refers to the present day.

The city of Tampere granted the Good Construction Award to the hotel in 2014. The jury stated that the hotel is one of the most impressive buildings ever built in Tampere in terms of cityscape.