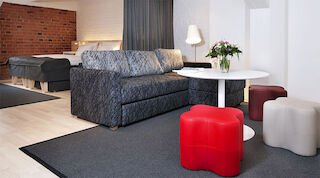 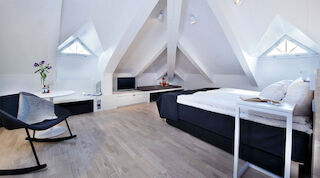 Located in a former granary, Hotel Villa features magnificent architecture and beautiful interior décor. The hotel is a perfect combination of old and new, and every room is unique in terms of shape and surfaces. Elements reminding us of the history of the building include the sturdy, metre-thick walls, the original brick walls inside the building, the original bay windows, and the impressive pillars in the lobby. The modern touch, on the other hand, is reflected in the fresh, light-coloured surfaces and contemporary furniture.

The hotel went through a complete renovation in 2011: all rooms and en-suite bathrooms, as well as the lobby and bar were given an entirely new look. In addition, a room-specific cooling system, a new sauna department and the lobby's Coffee Bar were built. The granary, built in 1926, is a protected building and, therefore, the hotel facade has remained in its original glory. Sisustusarkkitehdit Gullstén-Inkinen Oy was in charge of the architectural and interior design in the renovation project.

Hotel Villa's interior decoration received recognition as one of the best in the world: the hotel made it to the top six in the international Interior Design Awards 2011 competition. In addition, Hotel Villa was also nominated for an award for the best hotel design in 2011.

In the hotel lobby, you can admire the classic white DAR rocking chairs designed by Charles and Ray Eames in 1950 and a painting by Margareta von Bonsdorff. In the hotel room, you can sit on the Kola chair designed by Mikko Laakkonen for the Finnish company Inno. The rocking chair version of this chair was developed specifically for Hotel Villa. The rooms also have lovely, soft blankets hand-knit by volunteers working for the local senior support centre Mummon Kammari.

The name of the hotel, Villa, means 'wool' in Finnish, and this material is also featured in the décor. Wool is used in the upholstery of chairs and in bed covers, as well as in the charming lamb-themed artwork. Paintings depicting fields remind us of the history of this former granary.