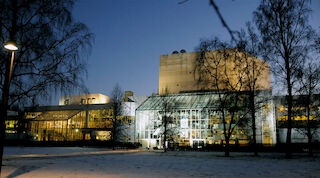 The peak of the highest observation tower in the Nordic Countries reaches up to 168 metres. A fantastic panorama of breathtaking lake scenery and  the city centre unfolds in front of you from the tower's observation deck or from the rotating Restaurant Näsinneula.

This characterful café renowned for its doughnuts is located at the foot of red-granite observation tower built on the top of the world's largest esker, Pyynikinharju.

A block of everyday life of workers and a piece of Tampere's history. Where and how did people live in the olden days? Amuri Museum of Workers' Housing narrates facts in a fascinating manner, opens a door to historical dwellings, introduces visitors to human fates and portrays living through nine decades.

The Hiekka Art Museum was founded by the goldsmith Kustaa Hiekka and in it is the oldest private art museum in Finland.

In Pispala, the landscape, the writer and his words are one.

Lenin Museum is the internationally most well-known Finnish museum. In the hall, where the current museum is located, Lenin promised Finland independence once his party gains the power in Russia. He also kept his promise in December 1917. Lenin and Stalin met each other for the first time in the very same hall in a meeting of Russian revolutionaries in 1905.

Design a new layout for the front page, read the Kalevala on iPad or code with C64.

Step into the world of Tove Jansson's Moomin books.

The national Police Museum is located in Hervanta, the largest district of Tampere. It is open and free for everyone and unique in Finland.

Sara Hildén Art Museum is an art museum funded by the City of Tampere and it permanently houses the collection of Finnish and international art owned by Sara Hildén Foundation.

THE FINNISH HOCKEY HALL OF FAME

The Finnish Hockey Hall of Fame is one of six museums in the world specialising in the history of ice hockey.

Tallipiha –stable yards is a part of the history of Tampere. Finlayson's cotton factory owner Wilhelm von Nottbeck commissioned beautiful Stable Yards to be built for his horses and their keepers in the 1800s.

The museum displays gemstones in cut and rough from, as well as corals, meteorites and fossils.

Tampere Museum of Natural History provides current information about natural phenomena and diversity of nature in Tampere region and answers to the questions relating to nature.

Tampere Art Museum presents both Finnish and international art-historical themes and phenomena in contemporary art. The art museum is especially renowned for its lively exhibition activities, Young Artist of the Year event and extensive publication activities. Collections administrated by the museum have approximately 14,000 works.

Spy Museum provides a good overview espionage methods throughout the ages. At the same time, you will get acquainted with top spies from all over the world. You may test some equipment for yourself and maybe do an Agent test.

Vapriikki is a museum centre with great variety located by the Tammerkoski rapids and offers things to do and see to the whole family.