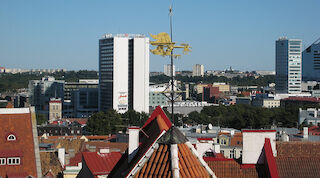 Viru, opened in spring-summer 1972, went immediately down in history as the first skyscraper in Estonia and the most prestigious hotel in the region. Over the years, Viru has become one of the most well-known symbols of Tallinn and Estonia for visitors from both East and West.

The construction of Hotel Viru was initiated by the Soviet tourism ‘strategists' who wanted the Communist superpower to have its own share of the millions circulating in the universal tourism business. Intourist was the state agency that oversaw the activities related to receiving foreign tourists. And it was the strong wish of Intourist that at least one big hotel be planned and constructed in Tallinn. After all, more and more tourists from abroad started arriving in Tallinn at the beginning of the 1970s and the Hotel Tallinn, opened in 1963, could no more meet the demand. On top of that, ship traffic between Helsinki and Tallinn had begun in 1965.

The design of the high-rise hotel – a unique building at the time, the kind people had never seen before – was prepared at the institute Eesti Projekt, under the guidance of the architects Henno Sepmann and Väino Tamm. Repo Oy, a Finnish construction company, agreed to the terms and conditions of the construction of the hotel and started carrying out the project in April 1969.

When Estonia regained its independence, it marked a turning point in the development of the hotel. 27.04.1994 the hotel was bought from the auction for 145 million kroons by AS Harmaron. In 1994 the hotel was privatized and the ownership went to Finnish company SRV Viitoset which has now become AS Uus Viru belonging to Pontos Oy concern. Later on Tallinn's most popular shopping centre, the Viru Centre, and the central station for city buses under the mall, were built. The construction of the Viru Centre also added 93 hotel rooms to the hotel. Today, the hotel is managed with a long term lease contract by the biggest Finnish hotel chain Sokos Hotels which is a part of the S-Group, one of the biggest commercial groups in Finland.


People who have visited Viru: