Interruptions in Online payments may occur 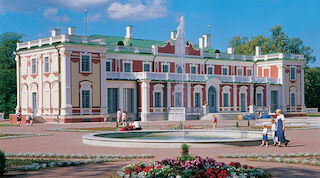 Here's the complete, alphabetical list of the city's attractions. If you already know the name of the attraction you're looking for, you'll easily find it here...

Balti Jaam Market
A sprawling market behind the train station selling just about everything.

Cathedral of Saint Mary the Virgin (Dome Church) and its Tower
The Medieval church, known as Dome Church (Toomkirik), that stands at the centre of Toompea hill is one of the country's most fascinating historic attractions. Visiting the church is free for tower check the ticket price (free with Tallinn Card).

Epping Tower
A chance to dress up in medieval armour is one of the features on display at the Epping Tower.

Glehn Park
Glehn park is a popular walking area among the people in Nõmme and also serves as a place to observe the stars or ski during the winter. Nearby is the Nõmme Adventure Park. During winter many lit ski paths are open.

Glehn's Castle
Built by Count Nikolai von Glehn in 1886 and surrounded by a sizeable park, the romantic, towering, Glehn Castle provides a perfect escape from the hustle and bustle of the city centre.

Hellemann Tower and Town Wall
Visitors not only get to see the tower, but they can also walk along a 200-metre stretch of the town wall, from where they'll get fantastic views of the Medieval city.

Hiiu-Rahu Cemetery
Established in 1919, it's the last resting place of quite a few prominent historical and cultural figures, as well as those who fought for Estonia's independence.

Horse Mill (Hobuveski)
This squat, round house on the northern edge of Old Town served a vital function in times past: from the 14th to the 18th centuries it was the site of a horse-powered mill. Nowadays it's home to occasional exhibitions, concerts and theatre ...

Kadriorg Park
This vast park surrounding Kadriorg Palace is without a doubt the best place in town for relaxed strolling, pigeon feeding and life pondering.

Kalju Baptist Church
The only church in Kalamaja is also the very first place of worship for the Baptists in Tallinn.

Kultuurikilomeeter (Culture Kilometre)
Added in 2011 for Tallinn's European Capital of Culture year, this pathway was designed to provide access from the city centre to a number of cultural sites in Kalamaja area.

Maiden's Tower
This square, three-storey Town Wall tower next to the Danish King's Garden dates to the 14th century.

Nõmme Adventure Park
For a sporty day out enjoy the adventure park in this leafy park, abseiling, climbing and wandering through a forest wonderland.

Nõmme Market
A lively, colourful market on the outskirts of the city focusing on local, organic produce.

Nõmme Museum
The museum, housed in Nõmme's railway station, tracks the history of Nõmme and provides insight into small town life through photos and numerous household items from the first four decades of the 20th century.

Nõmme Rahu Church
This was initially a factory building erected by the landlord Nikolai von Glehn in 1901 and reconstructed as a church by architect Friedrich Wendach.

Nõmme Sport Centre
The Nõmme Sports Centre is a multifunctional recreational and leisure facility located in a forested area about 10 minutes' drive from down town.

Patarei Prison and Sea Fortress
Sea fortress Patarei (Battery) is a unique architectural monument that served many years as a prison (open during summer season only).

Pääsküla Bog
Nature trails starting at the end of Hiiu street boast of the flora and fauna of the bog, viewing tower and countless ponds or streams.

St. Olav's Guild
This hall was the historic home of the Oleviste Guild, an organisation that united craftsmen from what were considered the lower-class trades – butchers, tanners, gravediggers – who were by and large Estonian. The guild began using the house ...

Tallinn Botanic Garden
Botanical garden near Pirita district is the best place in Tallinn to stop and smell the flowers.

Tallinn`s Medieval Residential Houses
One of the most charming features of Tallinn's Old Town are the gabled, Medieval residential houses that line its streets. There are dozens that are worthy of a shapshot or two, but among the most striking of these are famous Three Sisters ...

Tallinn Song Festival Grounds
This sprawling event venue in Kadriorg has a special place in the hearts of Estonians as Song and Dance Celebrations take place here every 5 years.

Tallinn Zoo
The Zoo is most famous for it's collection of goats and sheep, but it also has domestic pets for children to pet in a mini zoo.

Tallinn Town Hall
The Town Hall was the political centre of Tallinn for centuries and is one of the finest original pieces of Gothic architecture in this part of Europe.

Tallinn Town Wall
Despite or maybe because of its military function, the surviving parts of the city's reinforced three metre thick stone walls give the city its chocolate box, fairy tale charm.

Tallinn TV Tower
It is no exaggeration to say that the renovated 1980s era television tower, now a museum, restaurant and venue, will take you up into the heavens, to right beneath the clouds.

Toompea Castle
Perched on a limestone cliff and towering over the rest of the city, Toompea Castle has always been the seat of power in Estonia.

Town Hall Pharmacy
Marzipan was one of the pharmacy's best sellers, one that local legend insists was actually invented as a curative here in the 15th century.

Viru gate
Attractions A-Z
This pair of picturesque, ivy-covered towers at the beginning of Viru Street – one of the main pedestrian arteries into Old Town – is often the very first glimpse visitors get of historic Tallinn. Anyone passing between them couldn't be blamed ...