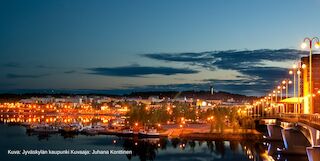 Jyväskylä, the Athens of Finland, is a city in Central Finland with a healthy dose of self-confidence. Almost every other building in the city was designed by Alvar Aalto, the most internationally acclaimed Finnish architect. Therefore, architecture is a part of everyday life in Jyväskylä. The University of Jyväskylä trains the best teachers in Finland, and every schoolkid knows that the name of the local hockey team JYP is pronounced "yippee". Even the adults, commuting on the bus from the district of Säykki to the suburbs of Pupari, know this.

The centre, the pedestrian street and the Compass

Residents of Jyväskylä meet on Kauppakatu, the street that runs through the centre of the city from one end to another. At the upper end, you can enjoy bohemian and urban culture and the University, and at the lower end the street becomes the best pedestrian street in Finland. It is a shopper's paradise with numerous stores, shopping centres and restaurants. And the Compass – it is right in the middle of the pedestrian street.

Toivola Old Courtyard is a true leap back to 17th-century Jyväskylä. Handicraft stores, a café and beautifully restored old buildings take you on a nice journey back in time. Remember also to visit Markus, the blacksmith at the Manalanpaja smithy.

Things happen in Jyväskylä. If you do not believe it, take a look at the city's event calendar, which includes over 5,000 fantastic happenings every year. In the summer, we have the Jyväskylä Festival, the Yläkaupungin Yö city festival, the SuomiPop festival, Neste Rally Finland, the Palvipäivät festival in Korpilahti, the Lutakko liekeissä festival, and the Finlandia Marathon, just to name a few.

All great cities are located near water, and so is Jyväskylä. On the shore of Lake Jyväsjärvi there is a cosy harbour with a number of restaurants and services. Starting from the harbour, you can cycle around all of Jyväsjärvi along the Rantaraitti road, which also is the best of its kind in Finland.  You do not need to own a bicycle – you can borrow one from your hotel's reception. Remember to take a swimsuit with you, because there are five public beaches along the Rantaraitti road – so splash away!

JYP (still pronounced "yippee") is probably the most well-known sports club in Jyväskylä, but in addition to the hockey team, there are plenty of other sports opportunities in Jyväskylä, including football, futsal, Finnish baseball, rugby, swimming, skiing, ski jumping (remember Matti Nykänen and his saying "every chance is an opportunity"?), athletics, orienteering, downhill mountain biking, and parkour. This year, Jyväskylä was also voted as the cycling city of the year.

This city of well-being and sports also hosts the Hippos area, which is the best and most versatile centre of sports, sport and health sciences and sport technology in Finland. It is located right next to the university (designed by Alvar Aalto, of course).

Central Finland is part of the Finnish lake district, and it is best described by the best of the regional anthems:

The beauty of the noble hilltops, oh, sweet homeland and its memories."

You can hum Central Finland's regional anthem on the steamboat cruises that depart from Jyväskylä harbour to Lake Päijänne. Where the city is not limited by lakes, it is surrounded by forests. There are a number of recreational outdoor and camping areas in the city. Self-directed hikers can find trails and shelter in the Halssila region, and the Laajis urban outdoor area includes an adventure park and downhill mountain biking for real daredevils.

There is a ridge in the centre of the city, which has been aptly named Harju ("The Ridge"). On the top of Harju, there is a water tower called Vesilinna, and the Vesilinna observation tower provides the best view of the city. From up there, you will notice that almost the entire area is full of forest lakes and forests.

Along with Matti Nykänen, Alvar Aalto is probably the most internationally renowned person hailing from Jyväskylä. For this reason, he has a dedicated museum here (which he designed himself, obviously). Matti does not have a museum.  Next to Alvar's museum there is also the Museum of Central Finland (guess who designed it). It gives you a good idea of how far Jyväskylä has come on its journey from the hunting grounds of the Tavastians to this splendid city.

A number of theatre groups operate in Jyväskylä during the summer in different locations. Teatteri Eurooppa Neljä is the biggest of them all, and Riihivuoriteatteri is located in the highest place. Jyväskylä City Theatre (oh yes, designed by Alvar Aalto) mostly operates between autumn and spring.

Live music is provided by Tanssisali Lutakko and there are events around town and in restaurants and bars.

You can find more information about Jyväskylä, events and other activities on the Visit Jyväskylä website at http://visitjyvaskyla.fi/