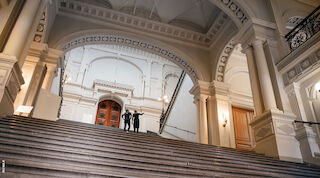 Senate Square and its surroundings form a unique and cohesive example of Neoclassical architecture. The square is dominated by four buildings designed by Carl Ludwig Engel between 1822 and 1852: Helsinki Cathedral, the Government Palace, the main building of the University of Helsinki and the National Library of Finland. Exhibitions and concerts are held in the Crypt of Helsinki Cathedral (Kirkkokatu 8), where in summertime Café Krypta is open

Helsinki's iconic habourfront market sells traditional and seasonal foods, as well as handicrafts and souvenirs. Heated café tents allow you to sit in comfort and enjoy steaming hot coffee even on the coldest days in winter.

The Tori Quarter between the Market Square and Senate Square dates back originally to the 1700s. Carl Ludwig Engel later updated the buildings in the Empire style to fit in with the Senate Square. Until the early years of the 1900s the Tori Quarter was the centre of commerce and social life in Helsinki. Today the quarter is once again being revitalised as an active centre of urban culture in the form of numerous events, design boutiques, restaurants and cafés. Helsinki City Museum can also be found in the Tori Quarter.

Address: Between the Market Square and Senate Square

The Esplanade has been the main promenade for residents and visitors alike for the past 200 years, and people still flock to the park in summertime to sit on the lawns and terraces. The statue of Johan Ludvig Runeberg, the national poet of Finland, was unveiled in 1885. Free concerts are held throughout the summer on Espa Stage.

Completed in 1868 in the Katajanokka district of Helsinki, Uspenski Cathedral is the largest Orthodox church edifice in Western Europe. Designed by the Russian architect Aleksei M. Gornostajev, the cathedral is framed by a park. The redbrick edifice combines Eastern and Western influences: the façade represents classic Slavic traditions, while the interior reflects both Byzantine traditions and the influence of Italian art.

Ateneum is the National Gallery of Finland and is celebrating its 125th anniversary in 2013. The collections include Finnish art from the 1750s to the 1960s and western art from the latter half of the 1800s to the 1950s, including many national treasures. Exhibitions in 2013 include "52 Souls – Symbolist Landscape 1880-1910", "Treasures of the Palace", "Eero Järnefelt 150 Years" and "Tuusula Artist Community".

Opened in 1998, Kiasma presents three major new exhibitions a year alongside numerous smaller projects. The programme includes exhibitions of Finnish and international art and thematic group exhibitions. The intriguing building was designed by Steven Holl and uses natural light that filters in through the glass surfaces.

A first-class concert venue and meeting point, Helsinki Music Centre also has a café, restaurant, shop and the Sibelius Academy Library for visitors to enjoy. The sculpture "Gaia" (2011) by Kirsi Kaulanen adorns the Main Lobby, while the sculpture "Laulupuut" (2012) by Reijo Hukkanen can be admired outside. Helsinki Music Centre is home to the Helsinki Philharmonic Orchestra, Radio Symphony Orchestra and Sibelius Academy.

A fine example of Finnish wooden architecture, this futuristic chapel is a place for quiet meditation amidst the hustle and bustle of the city centre. Completed in May 2012, the chapel was designed by the architecture firm K2S Oy.

The museum presents four permanent exhibitions: Finnish Nature, World Nature, History of Life, and Story of the Bones. Visitors can dive beneath the surface of the Baltic Sea and marvel at the collection of bones and magnificent dinosaurs. There is also a fascinating new exhibition on the secret world of bats.

Finland's 200-seat parliament gathers in this impressive building representing 1920s Classicism. Sessions of the parliament can be observed by the public on Tuesdays to Fridays.

This famous concert and meeting hall was designed by legendary Finnish architect Alvar Aalto. Guided tours are available and take around one hour, and you can visit the photography exhibitions in Galleria & Café Veranda.

The museum's main exhibitions present Finnish life from prehistoric times to the present. The magnificent Jugend building was designed by legendary architect trio Gesellius-Lindgren- Saarinen and was completed in 1910. The workshop VINTTI is an interactive exhibition especially for children.

the Design Museum (Korkeavuorenkatu 23), which presents exhibitions on the history of Finnish design and current trends.

The best places to discover Finnish design and architecture from yesteryear and today. The museums are conveniently located back-to-back to each other.

Arabia area is a modern centre for sciences and the arts, as well as a waterfront residential district that can be easily reached by Tram 6 or 8. The area is home to the 130-year-old Arabia porcelain factory, museum and gallery, as well as factory outlets. Works of art throughout the area describe history, nature and the unique Finnish design heritage. The inspiration of artists, designers and craftsmen can be seen in the buildings and in the spirited sense of community.

Linnanmäki Amusement Park has been entertaining families since 1950. The biggest selection of rides in Northern Europe offers something for everyone, from the wild and crazy to the nice and easy. The legendary wooden rollercoaster is over 60 years old and remains the most popular ride, while the games will test your skills and sense of fun. There is a special programme for the youngest

members of the family, and all visitors can enjoy the entertainment on the main stage. You can also come to Linnanmäki simply to enjoy great food and the magical atmosphere. The Kattila restaurant complex houses six restaurants under the same roof.

An amazing underwater world experience with beautiful and fascinating creatures of the deep sea.

Founded in 1889, Helsinki Zoo is one of the world's oldest zoos. Helsinki Zoo keeps over 2000 animals and hundreds of plant species from the Arctic tundra to tropical rainforests and deserts. Protection of extremely threatened species is one of the zoo's most important fields.

Suomenlinna is a maritime fortress that was built off the coast of Helsinki in 1748. Here you can get a real feel for Finland's position between East and West; Suomenlinna was shaped by three distinct historic eras when helped defend first Sweden, then Russia and ultimately Finland. Suomenlinna is a UNESCO World Heritage Site as a notable example of European military architecture. Suomenlinna is among the most popular sights in Finland and a living district that is home to 850 city residents. With its museums and events, Suomenlinna offers a unique experience for visitors of all ages, who can also enjoy the islands' enchanting cafes and cosy restaurants. Children can have a great time exploring the many

tunnels of the old fortress.

Seurasaari is a popular museum island and recreational area located twenty minutes by bus from the city centre. The wooden buildings at the Open-Air Museum represent Finnish building traditions from the 18th to the 20th century. Built in 1685, the Karuna Church is one of the most popular venues in Helsinki for summer weddings. During the summer season various workshops and events are organized at the museum presenting traditional handicrafts, customs and folklore. Folk dancing performances are also held in summertime. Traditional Midsummer Eve celebrations and bonfires are held each year at Seurasaari. Fun family events are also held on the island during the Christmas, Epiphany and Easter holidays. The Restaurant Seurasaari serves visitors throughout the year. Across the bridge from the island on the mainland is the entrance to the Urho Kekkonen Museum Tamminiemi. Halfway along the bridge, a path leads to the Pukkisaari ancient village.

The historic redbrick buildings that once served as the city abattoir form a pleasingly authentic courtyard surrounded by shops, restaurants and event venues. A range of fun happenings can be experienced from farmer's markets to picnics  and more, showcasing everything that Helsinki's vibrant new urban culture has to offer. At the heart of the Abattoir is the Kellohalli restaurant and event venue, where you can enjoy breakfast, lunch and dinner

The Olympic Stadium is one of the most famous landmarks in Helsinki, and it has been described as one of the most beautiful stadiums in the world. It has been the arena of great sporting and musical events since 1938. The Games of the XV Olympiad were held here in 1952. The stadium tower is 72 metres high and offers a spectacular view over Helsinki. The stadium design was the result of an architectural competition won by Yrjö Lindegren and Toivo Jäntti with their aesthetically pure Functionalist design. The stadium also houses a hostel, the Sports Museum and Olympia Bistro.

Quarried out of the natural bedrock, Temppeliaukio Church was designed by Timo and Tuomo Suomalainen and completed in 1969. Today it is one of the most popular tourist attractions in Helsinki, as well as a popular venue for concerts.

One of the most popular tourist attractions in Helsinki, the Sibelius Monument can be found in Sibelius Park in the Taka-Töölö district. Unveiled in 1967, Sibelius Monument was designed by Eila Hiltunen to allow visitors to interact with the design and create sounds and echoes in the pipes.